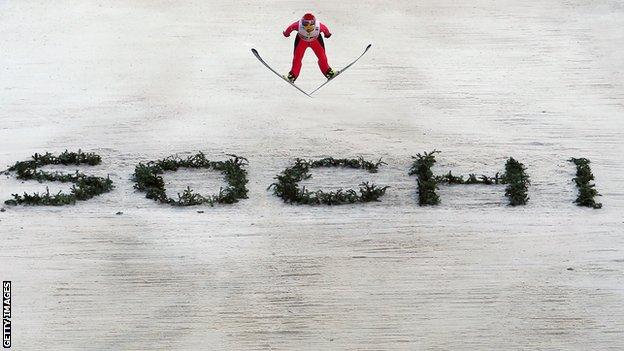 For British fans, ski jump brings to mind the escapades of British competitor Eddie "The Eagle" Edwards, who competed in the 1988 Winter Olympics in Calgary.

But ski jump is a complex sport, steeped in history, which requires a great deal of skill and technique to compete successfully.

The sport is believed to have originated in Norway during the late 1800s, Ole Rye, a lieutenant in the Norwegian army, jumped a distance of 9.5 metres in front of a crowd of soldiers in 1809.

The ski jump is a lot more than just take-off and landing. Of all the traditional winter sports it is probably the most daring and certainly the most risky. If you get any part of your take-off or landing wrong it could lead to serious injury, but that shouldn't put you off getting involved in a rewarding and enjoyable sport.

Jumps require strong balance, the ability to keep your body balanced while in mid-air (not as easy as it may sound) and solid stamina and muscle mass.

Flexibility is key. It is essential that you can move out of the blocks quickly and change the shape of your body in a split second.

There are no fully fledged ski jump facilities in the UK, alas, so to try the sport for real you will have to head to continental Europe.

However, you should speak to a regional development officer first to see what help is available - and depending on your skill level, you may need considerable time on the slopes beforehand to brush up on your skills.

Norwegian Sondre Norheim is believed to have been the first modern-day ski jumper. According to the International Olympic Committee, he won what was considered to be the first competition in 1866 at Ofte in Norway.

Sepp Bradl of Austria is recognised as the first competitor to jump more than 100 metres.

Ski jumping became an Olympic sport at the inaugural Winter Olympics in 1924 and has been an ever-present since, with different variations and disciplines being featured at the Games.

The strongest competitors traditionally come from mountainous European territories such as Finland, Norway, Switzerland and Slovenia, but the sport is also popular in Japan.

In 1988 the team version of ski jump was introduced for the Calgary Games, at which British jumper Eddie Edwards made his infamous appearance, finishing last in all disciplines and events.

Are you inspired to try Ski Jumping? Or maybe you are a keen enthusiast already? Get in touch and tell us your experience of the activity by tweeting us on @bbcgetinspired or email us on getinspired@bbc.co.uk.