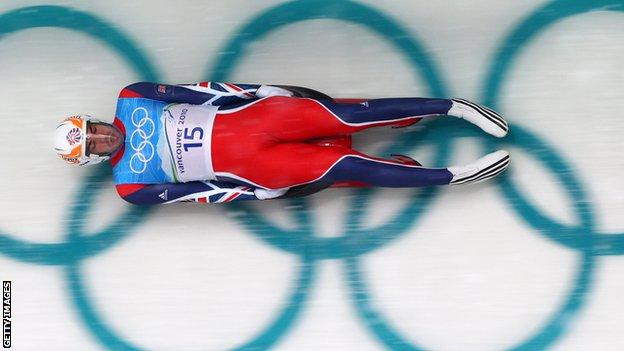 Luge is a relatively new form of one of the oldest winter activities in the world.

The luge, which translates as 'sled', sees competitors travelling feet-first down an icy track at up to 85mph - with only a helmet for protection.

The competitor lies on a pod made of moulded fibreglass, designed to match the contours of the slider.

The pod sits on two metal runners called steels which curve upwards. These are attached to 'kufens' at the front which steer the pod. Kufens and steels are longer on the doubles luge.

There are no brakes. To slow down, the slider drags their feet along the ice and grips the kufens.

Luge has many benefits, though they may not initially be clear to you when standing at the top of the run for the first time.

Given the confined space in which lugers operate, any small movement is key - so the sport encourages strong movement skills along with improved agility, balance, and coordination.

Strength and conditioning are essential to withstand the speeds and G-forces encountered as you progress in the sport.

Yes, you can learn to luge in Britain. Chill Factor-e in Manchester now offers a dedicated luge facility. It's only 60m long and far removed from the Olympic event, but it will offer you a taste.

Beyond that, anyone keen to pursue luge in the UK will have to be prepared to travel abroad to improve. Britain's only Olympic luger of recent times, AJ Rosen, was born and trains in the United States.

Luge takes it influence from early sled competitions in Scandinavia, as well as the inception of sports like skeleton and bobsleigh in Switzerland and St Moritz.

Team GB's website explains that an Australian student, George Robertson, won what is reputed to be the world's first international sled race in 1883, on a 4km stretch of Swiss road.

Luge events were introduced to Olympic competition for the first time in 1964, when Thomas Kohler of East Germany became the first gold medallist. The programme hasn't changed from its original Olympic format, although luge competitors now use the same course as the bobsleigh.

Are you inspired to try Luge? Or maybe you are a keen enthusiast already? Get in touch and tell us your experience of the activity by tweeting us on @bbcgetinspired or email us on getinspired@bbc.co.uk.