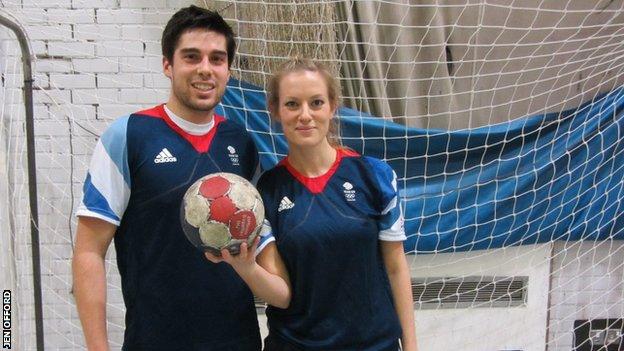 Meet the woman who took London 2012's motto - "Inspire a generation" - to heart.

Jen Offord, by her own admission, is not naturally sporty or athletic. Like many Londoners, she says, she was worried about the prospect of the world turning up on her doorstep last summer.

"As the Olympics were approaching," Jen told Get Inspired, "I was feeling pretty cynical about them. I live in London - I thought it would be a nightmare.

"I thought the transport system would grind to a halt, nothing would work and there would be too many people here, it would all be a bit annoying.

"But as the Olympics got closer and the torch relay was getting under way, I was getting more excited - and London became a really fun place to be. I got quite into it all."

Plenty of people shared Jen's experience of Olympic and Paralympic London last summer, but few have since indulged in a turnaround quite so extreme. Shedding her Olympic cynicism, the 30-year-old embarked on a mission to try all 38 Olympic sports in one year.

"I was watching the triathlon with some friends in St James's Park, and was really getting excited by it all. I was thinking: 'Why don't I take up a sport?'

"I was thinking about all the different sports I had seen over the course of the Olympics that I could try. My friend said, why don't I have a go at all of them and then write a blog about it.

"I set myself a challenge of trying all the different Olympic disciplines within the space of a year, starting at the end of August last year. I'm determined to get them all done. I can't remember everything I've tried because there are so many of them, but I know I've tried lots of sports."

Jen's only previous sporting endeavour of this nature was the 2009 London Marathon, but she insists she was not "naturally athletic" as she embarked on her post-Olympic adventure.

"I didn't like sport at school, there weren't any sports that I played regularly. I ran the marathon in 2009 because it was an ambition I had always had, and after that I did a bit more exercise and went to a few more classes here and there, but the primary motivation for that was to enable me to eat more cake."

After setting up her blog, Jen managed to receive help from Team GB athletes who offered tips.

"Twitter has been responsible for a lot of it, I managed to get Team GB to retweet a link to my blog and Twitter feed, and off the back of that Sebastian Prieto retweeted it and I contacted him.

"He put me in touch with some of his team-mates and some other Olympians, so Chloe Rogers from the Team GB hockey team contacted me, and I got a tweet from Dame Kelly Holmes which was a big moment."

"A lot of people out there were like me. They maybe didn't like sport that much at school, they have a vague aspiration to get involved now, but they don't really know what they would try and how they would go about doing it.

"I've had people getting in touch who told me they enjoyed reading about the different sports I've tried, and thinking maybe they would have a go. It's been really nice to see other people either have an interest in it or be inspired by the project itself.

"I've tried so many things I wouldn't have tried otherwise. I'm definitely fitter, I'm definitely stronger and I'm happier as well. There are so many positive things about sport that have completely changed my view."

At the time we spoke to Jen, she had tried 28 of the 38 sports. Diving, mountain-biking, triathlon, sailing and more are yet to be conquered.

"The one thing I want people to take away from this is that there is a sport for everyone, but you may not know it yet," she concludes. "Go out and try the different sports and you will find the right sport for you."

Can Jen see herself continuing with any sports when the challenge has finished?

"I definitely want to keep up something, that may be the next challenge - to see how good I can get at one sport in a year."