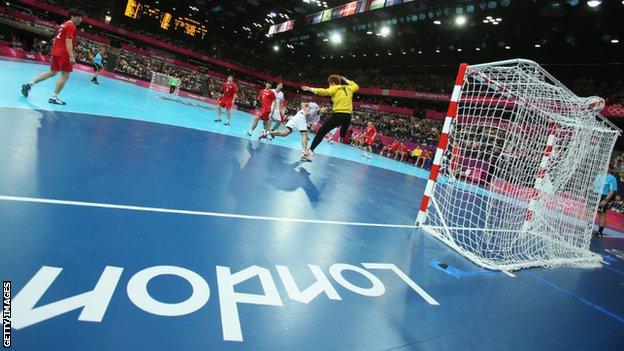 One year on, the first handball matches since the Olympic Games have taken place inside the venue - reborn as a sports centre for the community - and on its hallowed London 2012 floor tiles. Handball will be a regular feature here.

If you missed it at London 2012, handball is played on an indoor court between two teams of seven players. To simplify things greatly, you use your hands to throw the ball into the opposing team's goal.

For handball's dedicated British fans, getting back in the Box at the Olympic Park has been a rare thrill.

"We're in our Wembley," says Paul Stewart, who plays for Ruislip Eagles and took part in one of Sunday's inaugural games.

"This is the pinnacle. You don't get to play in the biggest sports stadiums in football unless you're a pro. Every so often I look up from what looks like a gym floor and see these banks of seats, and remember - I'm in the Copper Box! Wow!

"I can see the seat I sat in at the Olympics."

Stewart was not a handball player this time 12 months ago, but he traded some water polo tickets with friends for the chance to see the sport and a love affair was born.

"We saw a double header in the group stage, Croatia-Spain and France-Sweden. The wow factor was there, watching these amazing goalkeepers.

"I went to my first session at the end of August last year, intending to be a goalkeeper, and the buzz was amazing.

"I remember getting home that evening and thinking: 'That was so much better than I'd imagined.' I was thinking I'd come home bruised or not even bruised because I hadn't touched the ball... but it was so much fun."

For Dani Sposi, setting foot inside the Copper Box is bittersweet. A former member of the British handball team, she narrowly missed out on selection for London 2012.

"During preparations for the Games we used to go there once a month," she remembers. "When I got there, I remembered the smell, all those times we used to train there.

"Being there as a player after the Olympics was a bit emotional, because I wasn't selected and it was very hard to go through all that disappointment.

"I had my six-year-old son, Matteo, with me. He said: 'Mum, why didn't you play at the Olympics?' I said: 'Well, the coach made a different decision, so mummy didn't play.'

Having a go at handball

Dani Sposi: "We had loads of people coming into the Copper Box on Sunday and asking about handball. We had another area in the arena where we could explain what handball is all about and let them shoot at goal.

"Sometimes people don't realise how hard handball is. Even the parents are like 'oh, I'll do it' - and then 'oh, this is hard!' You have to find the right co-ordination with the three steps and the bounce."

Paul Stewart: "We had easily hundreds, probably a couple of thousand people all told. There were points when it was massively busy, queues of parents with children all holding a ball waiting to have a go. It was superb.

"At league level, for the next year or so, it's going to be massive. If we get the right publicity, if people can see the sport and know it's still carrying on in the Olympic venue, that might drag them in across the country."

"He has been with me the whole journey, since he was eight months old - all the training sessions, travelling around. It was very good for him to be there, to go inside the Olympic arena. Even during training, I never had the chance to bring him in."

Sposi's dream of an Olympic appearance for Great Britain has ended, but other players in the Box still aspire to fly the British flag - despite a critical shortage of funding leaving GB's elite teams in limbo.

"Playing in the Olympic venue was a proud moment," says Gil Lewis, another who only started playing after London 2012.

Lewis already has two university team-mates who have been selected for the England Under-20 squad within a year of taking up the sport; he himself was chosen to play for the British universities team, but their trip to a tournament in the Netherlands fell apart when the travel proved too expensive.

A shortage of cash is a feature of life as a handball player in Britain, but Lewis is determined not to let it dampen his enthusiasm.

"This year I've been invited to move up to the first team; I was in shock when I was first asked. They've asked if I want to go to the Challenge Cup, playing in Bulgaria, and that would be an amazing experience," he says.

What is Get Inspired?

"That all has to be funded through ourselves and it's a lot of personal expense to play. But an opportunity to play in a European competition? You don't want to miss out because you didn't save up enough."

British teams competed at London 2012 by virtue of being the Olympic hosts. In future, they will have to qualify for the Games on merit, which is a big ask of a fledgling sport, but Lewis is determined to take the sport as far as he can.

"If a GB team is still around in the next few years, to be able to play for them would be fantastic," he says. "If you'd told me a year ago, I'd never have imagined I'd be anywhere close to being able to represent my country.

"There will be a few years before I'm near that standard and with all the work being done at grassroots, by that time hopefully the standard will have improved enough to warrant some kind of funding - to at least put some form of team out."

Stewart adds: "Outside the obvious problem with elite funding, we're in a very strong position to drive growth at youth level.

"At Ruislip, we're working hard to get together a full youth structure, plus I'm talking to local schools and colleges and we've got a tie-in with Brunel University.

"If we can get people into the sport, who knows what we can achieve?"