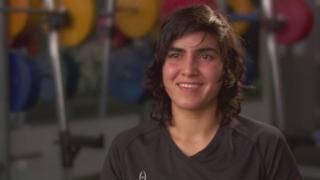 'I pretended to be a boy to play sport'

Maria Toorpakai Wazir is a 22-year-old squash player from Waziristan, a highly conservative area of Pakistan.

From a young age she disguised herself as a boy in order to play sports, but as her career grew Maria's squash academy discovered that she was a girl.

Maria received death threats after winning some big competitions, which meant that she had to start practising in her bedroom at home. She spent the next three years emailing squash schools around the world and eventually got a reply from Canadian squash legend Jonathon Power.

Maria now lives and trains in Toronto, Canada and she is passionate that all girls should be entitled to the same opportunities in sport and education.

Maria's film is part of series produced by the BBC's Commonwealth Class, featuring compelling human interest stories in the build up to Glasgow 2014.

Also, if you have been inspired by Maria's incredible story and want to follow suit and take up a new sport, check out BBC Get Inspired.