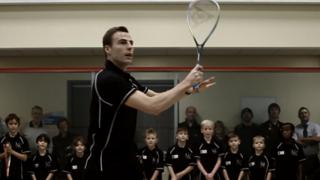 Squash world champion Nick Matthew is launching his own bid to get more children to play his sport and giving them the chance to play at the British Open.

The world number one, who won his third world title in November, is looking to take squash into the community in 2014 and has established a pioneering project to put groups of children from areas in Sheffield and Rotherham on a three-month coaching programme.

At the end of the programme the children will then have the opportunity to play squash with Nick on the Championship Court at the British Open which this year will take place at Hull's Indoor Sports Arena.

To take part in Nick's initiative or if you would be interested in participating in your local area please e-mail play@inspiredbysquash.co.uk

England Squash and Racketball also have a campaign called The Big Hit which is the easiest way for people to find out how and where they can get involved in squash and racketball.