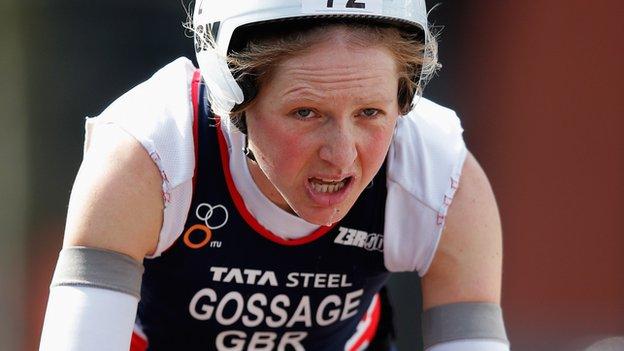 When Lucy Gossage used to lug her bike through busy lung cancer clinics, changing from sports kit into more professional attire in the toilets before seeing patients, most people thought she was "just a bit of a nutter."

But over the past decade the cancer doctor has gone from dabbling in triathlon for a dare, to winning long-distance races against full-time professionals.

While many of her fellow competitors were training all day, Gossage was spending endless hours in Cambridge laboratories doing research for a PhD into kidney cancer.

Yet the ritual chores of both fields, she claims, are not so different.

When I'm working as an oncology doctor, treating cancer patients, it put things in to perspective

"They are actually so similar," she says. "A lot of the day-to-day stuff of what you do is fundamentally pretty boring.

"You could be pipetting in a lab for four hours at a time or staring at cells down a microscope - and it's the same with doing long interval sessions on an indoor bike trainer."

Her dedication and hard work has paid off on both fronts.

Not only has Gossage has just completed her PhD, but with two Ironman wins in 2013 she was voted female Long Distance Triathlete of the Year by British Triathlon.

Now, with her studies finally out of the way, the 34-year-old is taking a well-earned two-year sabbatical to train and race full time.

"It's going to take some getting used to," she says. "At first it's going to be novelty value; having time to have coffee with friends and not having to set an early alarm.

"I just hope I can cope with the pressure and cope with having it as the main focus in my life. It's probably my biggest worry that I won't have work to keep me sane!"

The Ironman is a gruelling test of physical and mental endurance which involves a 2.4 mile swim, followed by a 112 mile bike ride, before a 26.2 mile run.

In 2012, while juggling her PhD with racing part-time, Gossage won one event in under nine hours - a remarkable feat that only a small group of British women have achieved.

Gossage says that what she might lack in raw athletic ability, she makes up for it with perseverance and mental toughness; vital skills she has been honing in her medical career.

"To get to medical school and to get through it you have to be very driven and a lot of the things you learn are applicable to triathlon," she says.

"But ultimately the skills I learn in triathlon - the determination, drive and focus - will also make me a better doctor."

In her first year as a full-time professional, Gossage hopes to qualify for the famous Ironman World Championship in Kona, Hawaii. She has raced there twice before, but as an age group athlete.

Gossage has added inspiration because of the outstanding record British women have at the Ironman World Championship in recent years.

"It's amazing really and I think we could realistically have six Brits in the top ten in the next few years at Kona," says Gossage. "I think you push each other to success.

"I think Chrissie raised the bar and everyone is trying to get up to where she was."

The oncologist knows her full-time professional triathlon career will be shorter than most, but she is fully focussed on making the most of her two-year sabbatical.

"When I was working as an oncology doctor, treating cancer patients, it put things in to perspective and made me realise that's it's very important to be clear with what you want to do in your life," she says.

"I feel like I'm halfway through a journey I've started. I'm under no illusions there'll be times in my triathlon career when I think 'it'd be nice just to be a cancer doctor and do something for someone else now and then, because triathlon is quite selfish.'

"And, equally, there will be times when I'm doing a busy clinic and its overrun, things aren't going well and you look outside and the sun is shining and I'll think 'I'd do anything to be out on my bike.'"

Gossage's first race on the road to qualifying for the Ironman World Championship in Hawaii is Ironman South Africa on Sunday 6 April.

If you are interested in exploring how to combine running, swimming and cycling into one event, explore our