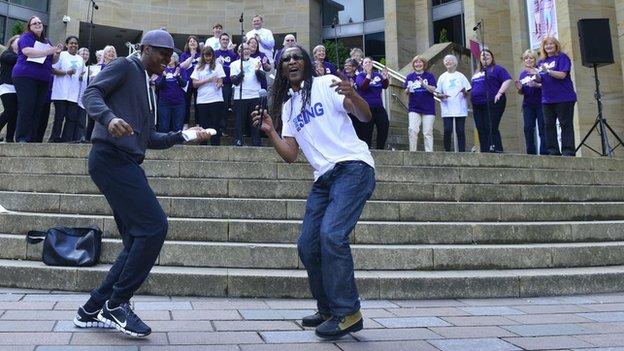 A £5m Glasgow 2014 Commonwealth Games legacy programme has been set up by a new charity.

The Spirit of 2012 Trust was established with £46m from the Big Lottery Fund to deliver a community legacy from the London 2012 Olympics.

The Games fund was launched during a public choir event on the the steps of Glasgow's Royal Concert Hall.

The plans, which include "pop-up sports clubs", aim to improve community participation in arts and sports.

BBC 'The Voice' contestant Max Murphy, who was a European under 17s judo champion, joined a choir of Big Big Sing singers at the launch.

He said: "I love both singing and sport and it means a huge amount to be able to support this investment in my home town as we are round the corner from this fantastic summer of sport.

"I dream of winning an Olympic gold one day and also had a life-changing experience appearing on The Voice - I know what difference it can make to be supported to grab opportunities.

"Sport and the arts can changes lives and I am hugely excited to see the impact of this £5m legacy investment."

Debbie Lye, Spirit chief executive, said: "The Glasgow 2014 Commonwealth Games is Spirit's first opportunity to recreate the amazing spirit that we saw entrance the nation in 2012.

"We know Scotland will do a fantastic job of staging a world-class sporting festival and are proud to be a partner of the Glasgow 2014 organising committee in connecting the momentous events of this summer to the rest of the UK, and delivering a long-term social impact."

Chief executive of Glasgow 2014 David Grevemberg praised the charity for continuing "the fantastic and positive momentum built through London 2012 and Glasgow 2014".

The five-strand initiative aims to promote community engagement across the UK through sport, art, music and volunteering activity.

The Big Lottery Fund provided Spirit with its endowment from the sale of the Olympic and Paralympic village.