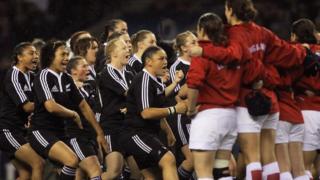 England: 'We're not afraid of the Haka'

England, Wales and Ireland are amongst the 12 teams vying for victory at the seventh Women's Rugby World Cup in France.

England have lost out to New Zealand in the last three World Cup finals, but flanker Sarah Hunter insists her team - who she describes as a tight-knit "secret club" - won't be intimidated by an All Blacks side in pursuit of their fifth consecutive title.

If you want to get into women's rugby, took a look at our rugby union guide and find out about clubs in your area.