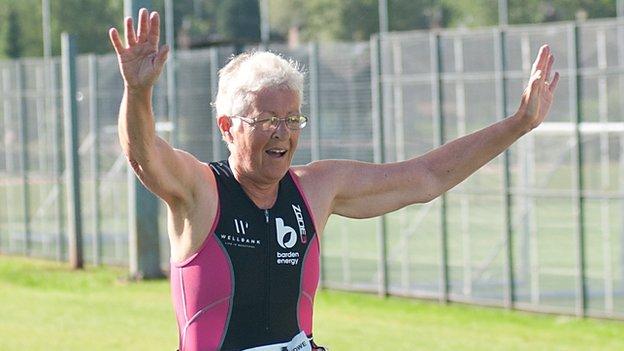 People across the country are proving age is no barrier to getting active, even if it means taking up a completely new challenge later in life.

Sue Faulkner got in touch with Get Inspired to tell us all about how she recently took on her first triathlon - at the age of 63. This is her story.

"Last year I went to visit my son and his family to watch him do a sprint triathlon. I was chatting with my daughter-in-law (who already runs marathons) and she joked that she'd be game for trying out a triathlon... but only if I did too.

To her surprise, I took up the challenge!

My first question was: 'OK, I'm going to do this, but how do I start?'

Firstly, I bought some trainers - I didn't own a pair previously. My first run was with my granddaughter alongside the canal, which was nice and flat. I could only manage 20 paces at a time before walking a short way, then running another 20 paces. It was a start.

I was more confident when it came to the swimming, as I swim regularly at a small pool in my village, although I only learned to swim front crawl 11 years ago when I was living in Japan.

I had accidentally joined a swimming class, thinking it was an exercise group, but luckily it was all done by demonstration as no one spoke English. I am sure I missed the finer points but it was just enough.

Now for the bike. I hadn't ridden one for 10 years and was a bit nervous. The bike I used initially was an old one of my son's which was a bit worse for wear as he'd had it when he was 15. I was rather wobbly and didn't feel at all safe. However, after several tentative weeks, my lovely husband bought me a new hybrid bike for Christmas. I was so excited and at last I felt in control of the bike instead of it being in control of me.

My first run was with my granddaughter by the canal, which was nice and flat. I only managed 20 paces before walking a short way, then running another 20 paces. It was a start

The running gradually improved and after about eight weeks I could run 2.5km, which was the distance of the race.

All was going well until eight weeks before the race. Frustratingly I caught a cold, which gave me a cough, so I couldn't run. I then had a stomach upset which left me feeling weak, followed by an ear infection which meant I couldn't swim. My balance was also affected so there would be no cycling.

For four weeks I couldn't train and at times I felt as if I would never regain my normal strength, let alone enough energy to race. But there was no way I could quit, as by now there was a lot riding on this challenge.

I am the chairman of our local swimming club and had decided to get sponsorship to raise funds for a replacement pool. Our pool is going to be demolished to make way for a housing development and hotel, so a large amount of money is required and I was hoping my funds would be a start.

The pool is rented out by the hour and is fully booked - 12 hours a day, seven days a week. In that sense, it's financially sustainable. It is kept warmer than most pools, so is suitable for the young, the not-so-young and those with disabilities. Ultimately we feel it is a vital part of our community, especially keeping our older residents active - the oldest swimmer is 93 - and we desperately need a replacement.

This all meant there was a lot resting on my shoulders as I didn't want to let anyone down, so I did manage to resume training.

The day of the triathlon dawned; it was bright and sunny after an early morning shower. We arrived at Kimberley (in Nottingham) and got ready for the swim.

My supporters tell me I did 12 lengths instead of 10: I got lost between the pool and transition, found a dead end and had to retrace my steps (my glasses were with my bike and I couldn't make out the gateway to the field). The bike section was fun but the run was really hard. It has always been my least favourite element but I ran all the way, never walking and finally crossed the finishing line.

There was lots of support from six of my grandchildren cheering: "Go Nanna go!"

I expected to come last, so imagine my surprise when I saw the results. I was 26th out of 41 and first in my age group (60-64). I was on 'cloud nine' for days. My daughter-in-law and granddaughter completed their course too.

I am so pleased to have become fitter that I am determined not to lose it, and am contemplating doing double the distance next year... you never know!

I have also raised over £1200 in sponsorship towards our new pool. It's a small step, but one in the right direction."

Are you inspired to try Triathlon? Or maybe you are a keen enthusiast already? Get in touch and tell us your experience of the activity by tweeting us on @bbcgetinspired or email us on getinspired@bbc.co.uk.