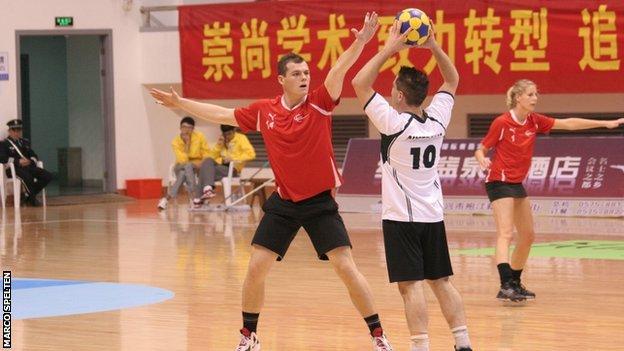 It's popular with university students, it has quirky hoops and it's not as mainstream as some other ball court games, but why would you play Korfball?

We asked Ben King, who just happens to be captaining the England team at the 2015 World championships in Belgium, to give us his top 5 reasons to get into Korfball and this is what he said...

Korfball is a truly mixed-gender sport

In a world where gender inequality is a big topic of debate, korfball acts as a beacon because it is always and only a mixed-gender sport. All korfball teams must have 4 male and 4 female players with teamwork between genders being absolutely crucial to a team's success.

Korfball makes you an all-rounder

Unlike in most sports, there are no set positions in korfball. At any given moment you will either be attacking or defending but after 2 goals are scored you will change ends meaning that attackers become defenders and defenders become attackers. This means that players get the chance to learn all elements of the game from shooting to passing to defending.

As a team sport, korfball naturally creates an air of camaraderie and comradeship. Everyone who plays is friendly and welcoming and in the summer, there are big outdoor tournaments where you will get opportunities to meet even more people. This korfball community extends across the globe and as the sport is played in around 60 countries you'll soon build up an international network.

Korfball will get you fit on the cheap

Korfball is a dynamic, high-energy game that will get your heart pumping and your blood flowing. The cost of joining most clubs around the UK is also often cheaper than a gym membership meaning that playing korfball is a sound investment for both your body and your bank account.

Korfball is a great conversation starter

I have played korfball for 12 years now and never has telling someone about korfball for the first time failed to start an interesting conversation. People are fascinated by the unfamiliar and their initial reactions will tell you a lot about their personality. It has also come up in many of my job interviews and certainly helped me in a few of them!

Korfball provides a chance to live out your sporting dreams

There is korfball available for all skill levels in the UK but for the more ambitious it is not inconceivable that you could one day play for your country with the right level of commitment and coaching. There have, in fact, been some recent examples of players who have gone from beginners to international players in 4 or 5 years.

Convinced to try it out? We hoped you'd say that. Take a look at our guide to getting into Korfball to find out how to start playing near you.