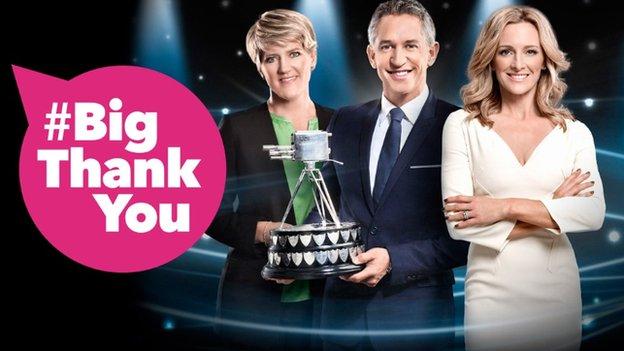 BBC Sports Personality of the Year will be saying a big thank you to the UK's volunteers, with 500 invited to attend the star-studded event in Glasgow on 14 December at the SSE Hydro.

Comedian and actor Eddie Izzard will lead the celebrations, offering an extra special acknowledgement to the incredible people who give their time to make sport happen in the UK.

It will also be a magical moment for some of the remarkable volunteers watching at home as Eddie will be live on the red carpet with a phone box where he will be surprising them with a phone call from a host of British sports stars.

Eddie, who is patron of Join In, a sports volunteer charity, along with the sports stars, will be saying thank you to the volunteers for the time and commitment they put into sport.

Join In, with BBC Get Inspired, are supporting the big thank you and viewers will be able to watch Eddie on the BBC Red Button and BBC News Channel before the main event on Sunday, 14 December, broadcast live on BBC One and BBC One HD at 20:00 GMT.

Eddie will also be presenting the BBC Get Inspired Unsung Hero Award on the night.

"There are so many unsung heroes across the UK who are motivating others to get involved in sport," said Izzard.

"Whether it's an enthusiastic parent driving a team to training or a dedicated coach who gives their time to help out - it's these super-volunteers that make sport happen. Every athlete will tell you how grateful they are to volunteers throughout their careers."

"With each volunteer creating capacity for eight-and-a-half additional participants in sport, it's vital that we keep the volunteering spirit of London 2012 alive and help to develop the Sports Personalities of the future."

Five hundred volunteers from the Glasgow 2014 Commonwealth Games, the Ryder Cup at Gleneagles and Glasgow Host City will be attending.

The Unsung Hero award was established in 2003 rewarding outstanding volunteer contribution to sport. Further tickets have been released for the event and are available at bbc.co.uk/sportspersonality.