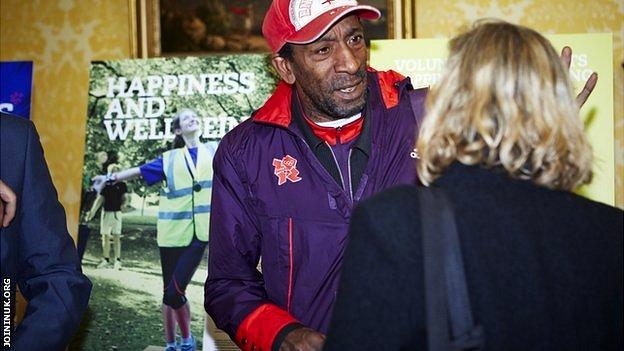 For many, volunteering is a way of putting coaching or cake-making skills to good use. For some, giving up time to help others can radically transform their life.

Junior Sterling has spent much of his 53 years battling "lonely times".

Born with club foot, the odds were clearly not stacked in the favour of a disfigured black teenager in 1970s Britain. Prejudice was commonplace.

As he points out, friends and a job were hard to come by.

Rejected from pillar to post, Junior got sucked into a dangerously dark cycle that chewed him up for decades: homelessness; dabbling with heroin and cocaine; petty crime; spells in prison - the list goes on.

"You just got used to it," he reflects. "I'd been fed so much negativity that I became negative myself."

"This grim underworld nearly drowned Junior, but he managed to get off the streets and wriggle free from the sticky web of dealers and villains.

Somehow he escaped. But what next?

Volunteering at the London Paralympics... I've never had a better time in all my life!

Disabled - "the pain can be excruciating sometimes" - and stuck on the third floor of a block of flats without any lifts, Junior was completely cut off from society.

Because of his criminal record, he couldn't find work. With no friends or family to call on, he hit a new low.

While desperately searching for something - anything - to focus his refreshed existence on, Junior recalls starting to help other people. It was evolution rather than revolution.

He began popping into the homeless day care centres he had previously relied upon and gradually, rather than getting support himself, Junior become someone who wanted be of benefit to others.

For the first time in his life he remembers discovering a real sense of purpose.

"And I've been volunteering ever since," he says proudly.

Know someone who volunteers in sport and deserves recognition for their efforts? Give them the chance to shine by nominating them.

When the London 2012 Paralympics came along, Junior was presented with what he saw as a golden chance: to utilise his growing volunteering skills, and to seal his desire to be part of something good.

He grabbed the 'once-in-a-lifetime' opportunity with both hands.

"I've never had a better time in all my life!" he insists.

Marshalling at the wheelchair tennis event at Eton Manor, Junior met hundreds of people from all around the world in a blizzard of excitement.

Nobody judged him on the colour of his skin, or recoiled from his disability, or tried to manipulate him for their own gain - he made friends.

He even formed a special bond with a mature student called Yanquin from China, and also met many of the great and good of British sport, including Seb Coe, Tanni Grey-Thompson and Tessa Sanderson.

"I met so many people - people that I would never have had the chance to meet before. We were like one big family. The camaraderie was second to none. The fans felt it. It was special.

"I'd just never been given a chance before and there it was, finally. We [the Games Makers] were all on the same level, even though I'd come from a completely different world from them."

Those he bonded with still have reunions and, since the Games, Junior has become a 'Local Leader' for JoinInUK, a post-2012 charity which matches volunteers to rewarding opportunities in their area.

Subsequently, Junior is now involved in an increasing number of community projects in his little pocket of west London. He also volunteered at the inaugural Invictus Games.

"London 2012 gave him a new lease of life," says Mary Hennessy, manager of the White City Community Centre where Junior is on the Steering Group for a £1m National Lottery-funded 'Big Local Project'.

"He tries his best to get involved in as many things as he can manage."

Junior puts it simply: "I used to be a nobody. Now I'm a somebody. That stops the loneliness."

His story might be at the extreme end of the spectrum, but there are a vast variety of inspiring examples which show that volunteering can have an overwhelmingly positive impact on your own life.

Thousands of 'hidden diamonds' volunteering at local sports clubs and events gain stronger sense of community; a feeling of belonging that, for people like Junior, might not be easy to come by.

Alienation is often replaced with a sense of wellbeing and positivity.

From growing social connections, business ideas can bloom too.

For Junior - a perceptive and intelligent man - it opened his eyes to how he might make use of his creative talents, and he has set about designing T-shirts that incorporate Braille and sign language in order to increase awareness of how blind and deaf people communicate.

Junior has not been perfect throughout his life, and life is far from perfect for Junior now. He has very little money. He limps rather then walks. He can't drive. He still lives alone. He's still desperate to get a 'proper' job.

Yet - because of volunteering and the new networks of people that Junior is linked into - loneliness is no longer a regular companion. He has friends, and there is joy in his daily existence.

"I've been through a lot," he smiles.