Women are less likely than men to become active because of body image and competency fears, according to Sport England research.

Sport England has started a campaign called This Girl Can to help encourage more women to take up exercise.

It uses slogans such as "Sweating like a pig, feeling like a fox" and images of normal women enjoying sport.

"They come in all shapes and sizes and all levels of ability."

The research revealed there was a significant gender gap, with two million fewer women than men in the 14-40 age range regularly participating in sport.

In other European countries, there is no disparity between men and women. In England, 75% of women said they wanted to be more active.

Price said: "Before we began this campaign, we looked very carefully at what women were saying about why they felt sport and exercise was not for them.

"One of the strongest themes was a fear of judgement. Worries about being judged for being the wrong size, not fit enough and not skilled enough came up time and again.

"This campaign says it really doesn't matter if you are a bit rubbish or completely brilliant.

"The main thing is that you are a woman and you are doing something, and that deserves to be celebrated."

The initiative is being promoted on national television and in cinemas and on social media using the hashtag #ThisGirlCan. 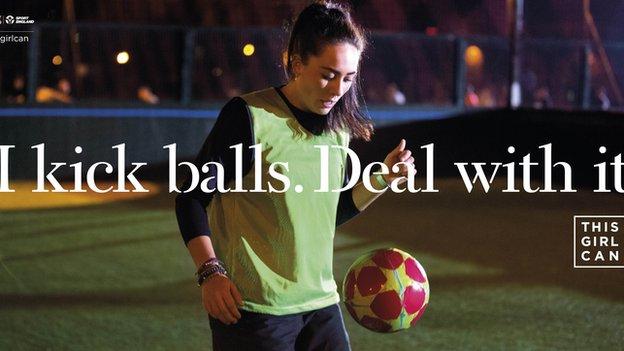