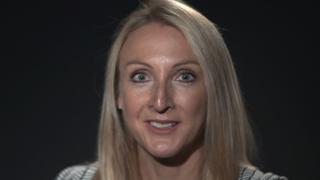 Marathon world record holder Paula Radcliffe talks about the female sports starts who were her inspiration.

Radcliffe will compete in this year's London Marathon, nine years after her last appearance and 12 years on from her world record run.

Who were and are your female sporting inspirations? Let us know on Twitter using the hashtag #mysportingheroine, and via the BBC Sport Facebook page.