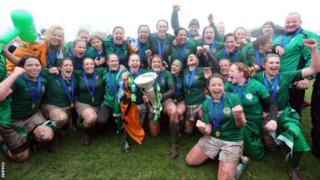 Participation in Women's Rugby has increased by 50% amongst teenagers in Ireland.

The recent success of the Irish National team has been credited with the increase in take up, with 20 new teams having formed since their 2013 Six Nations win.

"I don't think people understand how much that grand slam meant to us, not only as a squat but for the development of the game here in Ireland" says team captain, Niamh Briggs.

The sport is now offered to young girls as an alternative to the more traditional Gaelic sports and is gaining popularity.

The Irish Women have have followed up their 2013 glory with a victory over New Zealand at last years World Cup and a win against England in this year's Six Nations at Ashbourne, despite playing as an amateur team.

Fancy having a go yourself? Take a look at our guide to getting into Rugby Union.