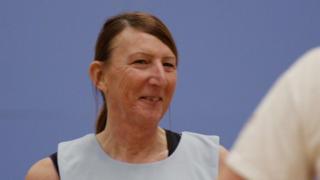 'I hated sport before my sex change'

Delia Johnston tells BBC Sport about her experiences of participating in sport as a transsexual.

In 2012 the 59-year-old had gender reassignment surgery to complete her transition from a male to a female.

As a male, Johnston hated sport, but she now plays netball and badminton regularly and wants other transsexuals to be able to do the same.