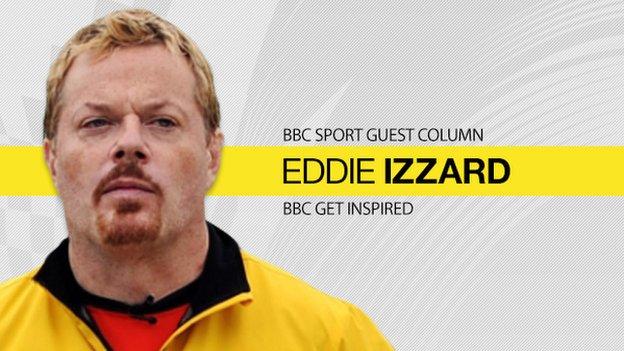 Comedian and Join In patron Eddie Izzard has launched the #BigHelpOut, in collaboration with BBC Get Inspired, which aims to inspire 10,000 new volunteers to assist at sport clubs. Here he talks about why he got involved, the summer of sport and names his Premier League champions - for 2024.

All my life I have done things to find out if they can be done, tested myself and pushed myself.

I was influenced by Neil Armstrong landing on the moon. Can you really get there, Neil? And he did.

My latest mission? The #BigHelpOut to get 10,000 volunteers helping and working in sports clubs around the United Kingdom by the 2015 Sports Personality of the Year on 20 December.

That's what we're pushing for... but there's no legal thing that we all explode if it's not met.

Seven out of 10 clubs in the UK need help. More than half the people in the UK don't realise it is the volunteers that makes these sports clubs happen.

It's quite a big number, but let's go for it. Let's see what we can do.

Volunteers are the lifeblood of sports clubs.

It could be you. Why not help out? If your kids are going to sports clubs why not stick around and help? You could do coaching if you want, but you don't have to be an expert.

You could make teas or paint bits of stuff... there's a lot that needs doing.

If you help out you get the benefits of well-being and you feel good about yourself.

It's all about the next generation of sports people.

My motto in life is 'if you shoot for the stars you can reach the moon'.

The first marathon... I was slow. I was being encouraged to do them faster but I kept stopping and talking to ducks.

It was a bold leap into the unknown, a chance to get my health back, get fit, inspire children and raise money.

Selling out in Paris and performing in French, playing the Hollywood Bowl twice, playing Berlin and then Hamburg in German, they are all beautiful things that I have done.

But 43 marathons in 51 days... it's one of the proudest things I've done, it could be the proudest.

Some things are really tough but if you don't grab hold of it and go for it... if you don't shoot for the stars, you won't reach the moon.

So join in, working with BBC Get Inspired, the #BigHelpOut, 10,000 more people by Christmas... it could be you.

'Palace will be champions'

I have been a Crystal Palace fan since Uncle John took me to my first match at Selhurst Park in 1969. My worst moment as a Palace fan? That would have to be when we lost to Southampton in the FA Cup semi-final in 1976.

It was the Malcolm Allison era. I was really into it and he was rock and roll. He wore a fedora, we were in the old Third Division. I was painting the door of the garage with my brother and listening to it on the radio. We lost 2-0... it was tragic.

Recently we have had Tony Pulis and we thought 'wow' after he got to 11th. Now we've just had the Alan Pardew season and he got to 10th. So on this basis we're just going to go up one place in the table a year and in fewer than 10 years' time... we'll be champions!

'I'm with Martina on grunting... it's silly'

Wimbledon used to be tragic when we - Britain - didn't have a winner. That's changed.

I remember I was in Edinburgh in a cab with Andy Murray's gold-medal match with Roger Federer at the 2012 Olympics on the BBC iPlayer. I plonked it on the seat in front of me and I remember the driver turning to me and shouting 'he's won it, he's won'. It was a beautiful moment just to be in Scotland when that was happening.

I have been to Wimbledon a number of times. It is fun but I hate the grunting. All those noises that sound like a dying fox. I'm with Martina Navratilova on this. She thought it was silly and I think it is silly.

'I couldn't get an Olympic ticket'

I was involved with the Games Makers at London 2012, I tried to meet as many of them as I could and say hi. I decided from the start I wasn't going to use my contacts to get tickets because everyone else in the country was struggling to get to the event too.

I remember being at the hairdressers and one of the Greek royals was in there, saying she had got tickets. Some people were getting in, walking in, and I wanted to be with the rest of the population. In the end I didn't watch anything live, apart from the closing ceremony which I was invited to. Some people and some sections of the media were saying London 2012 was not going to work.

People were bad mouthing it and it was the athletes who slapped these negative people around and said: "This is going to work." I felt it all changed when the British rowers started racking up the medals.

'The day I was called boring'

The Ashes are about to start. They're playing for a tiny weeny cup.

I just think you can't hold the Ashes urn over your head - it's too small. Why don't they take that cup and put it inside a massive cup?

Will there be any sledging? I've certainly had my moments of heckling. One person shouted 'boring' to me during an encore. I said: "You've waited for the encore to say that? As though the rest of it was fascinating and it just suddenly dipped."

'Why I feel for Rory'

Golfer Rory McIlroy is from Holywood, County Down, about three miles from where I used to live.

There's talk he could miss the Open with what sounds a bad injury. It's not too long ago that I suffered a knee injury while out running in Northern Ireland.

I was attempting to hurdle a squashed-down barbed wired fence that was surrounded by nettles. I didn't trip on the barbed wire and I didn't land in the nettles... but I did manage to pull everything in my left leg while jumping.

I can still run fine. But it still aches if I sit with my leg bent.

Eddie Izzard was speaking to BBC Sport's Neil Johnston. You can follow Izzard on Twitter,Facebook and Instagram.