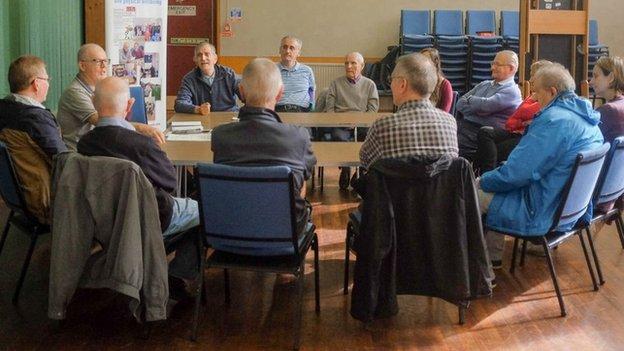 From playing with friends on the field to watching professionals from a rusty stand, every football fan cherishes their memory snippets from the past.

"It challenges their ability to believe in themselves," according to project co-ordinator Norrie Gallagher.

"Their confidence comes, and you build on that week on week."

I visited a group in East Kilbride that meets up every Tuesday morning to share stories from yesteryear.

Jim, one of the members, played for numerous amateur and junior teams in Ayrshire and East Kilbride as a young man.

"Most of the guys here have got dementia," he told me. "I've certainly got it."

Jim's last competitive match came in an amateur cup final when he was 50 years old.

"We got into a wee cup final and I thought 'that's great, I'm going to win something at last' - and we got beat," he said with a chuckle.

Jim told this story as if he was watching it back in his head, and almost re-living the experience.

Norrie, who facilitates the group discussions, said: "By having weekly meetings, the guys get to know each other.

"They get to be more tolerant and understanding of each other."

He explained that carers and staff also got to know what sparked the men's interest, so they too could also engage with them more readily.

Topics explored during our session included the rivalry between Auchinleck Talbot and Cumnock Juniors, the steep slopes of Lesmahagow FC's home pitch and a team once called Cambuslang Rangers.

The conversation then turned to Scotland international matches.

One group member said he was one of the few people to have seen Scotland beat Germany, referring to the match at Hampden in 1959.

"I went to stand with my dad and I couldn't believe the noise," he said, smiling.

Another man described how a ticketless Scotland fan at Trafalgar Square opened his holdall to the assembled media to reveal a grappling hook, which he claimed he would use to get into the game.

This prompted another man to recall how his friend had managed to get into the players' changing rooms at Wembley Stadium in 1967 before an England v Scotland match.

Norrie sometimes uses ex-players and football clubs to draw people in to the sessions.

Clyde FC have been involved with the Sporting Memories Network as part of their own work to engage with the local community.

The club's community foundation chairman, John MacKinnon, said there were huge benefits to the reminiscence programme.

"It's amazing the guys that come in here who can name the team line-ups of their given team from 1958/59."

"He loves coming to these sessions," she explained.

"He told his brother that these clubs are his whole life - and that's what gets him through I think."

Observing the session brings home to me the power of sport to bring about unique experiences and memories, which help form part of who we are.