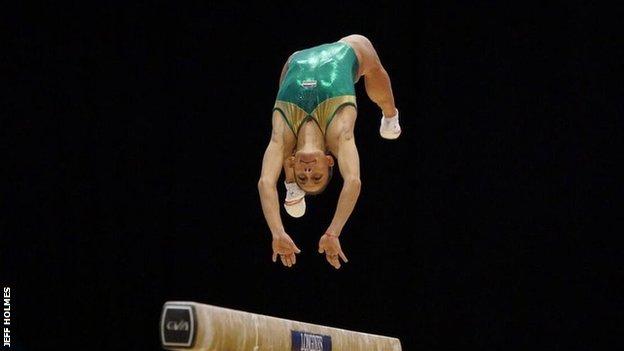 "I'm the happiest mother at this point in my life," she says.

Like any other mum, she speaks with pride that Alisher "plays basketball and is starting high school in Germany".

But 40-year-old Oksana is no ordinary mum. Oksana is defying the odds in a sport renowned for the extremely young age of its competitors.

She is a gymnast, in fact one of the best gymnasts in the world - a regular on the podium over the past 25 years.

The Uzbekistan gymnast competed in her 14th World Championships last week. Her first was in 1991, for the Soviet Union. She made her Olympic debut in 1992 competing for the Unified Team that won gold.

Speaking through a translator, she says with a laugh: "To be honest I retired after I had my son, Alisher.

"But then I went to the gym to get a little bit into shape after I gave birth, and I've been there ever since."

And clearly she's worked hard - the veteran wasn't at the Glasgow Championships out of goodwill from the international gymnastics community.

She attempted a vault many of her competitors wouldn't attempt - a handspring onto the vault followed by two front somersaults. Unfortunately she didn't land it well.

Getting into shape wasn't the only motivation for Oksana to retreat to the gym.

In 2002, her son was diagnosed with Leukaemia and she moved to Germany for his treatment.

"As a mother you would do anything for a healthy child and I thank Germany for that," she says.

"Just to have a few hours not to think about it - don't think about the pain, don't cry, don't let your heart down.

"I felt better afterwards, just having been in the gym."

Alisher made a full recovery.

Meanwhile, Oksana went on to join the German team, winning a silver on vault at Beijing 2008, and just missing a podium place, finishing fifth, in 2012.

Now competing for Uzbekistan, she has qualified for the test event in Rio next year for a place at the Olympics.

If she succeeds, she will find her place in the Guinness Book of Records as the only woman to have appeared at seven consecutive Olympic Games.

However, she insists that's not why she's doing it: "As a gymnast I will try to prepare the best I can, to give me a chance to win a medal."

And if she inspires other athletes to stay in the sport, then that's clearly a bonus.

"Perhaps I'm helping others because we are starting to see more 20 and 30 year olds in the sport, and that makes me happy," she says.

"But to be a healthy person in life, you don't have to be a professional athlete," she adds.

"I hope I can inspire many women, who are not athletes, to do any exercise - even just walking, jogging or stretching.

"It definitely helps - not only your physical health but also your mental health as well."

So will she retire if she makes it to the Olympics next year?

Adult classes are popping up at gymnastics clubs throughout the UK. Take a look at our guide for more information.