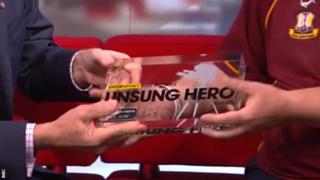 Now in its 13th year, the BBC Get Inspired Unsung Hero Award recognises and rewards outstanding contribution from those within local grassroots sport.

Winners have been chosen from each of the BBC's 15 Nations and English Regions, and they will join the sporting icons of today at the BBC Sports Personality of the Year 2015 event in Belfast on Sunday evening.

During the show, one of them will be awarded the overall 'Unsung Hero' award for the UK - but all of them (see list below) are amazing, inspirational people.

South West: Scott Allen - A marathon runner who set up his own club in Plymouth

Yorkshire & Lincolnshire: June Cooper - The running of a swimming and exercise class in Hull

Watch the BBC Sports Personality of the Year 2015 show on BBC One from 18:50 GMT on Sunday, 20 December to find out who wins the overall award.