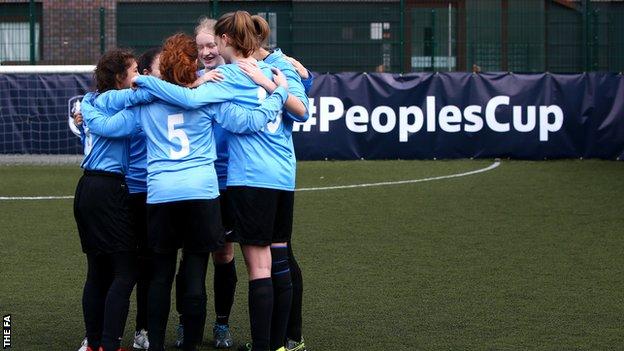 More than 35,000 people took part in the FA People's Cup first round at 120 different centres at the weekend.

The games, across 10 different categories, were given the full BBC Sport FA Cup treatment, with live text coverage on Saturday and Sunday.

Teams who were successful over the three days of action will play in semi-finals weekend on 27-28 February.

Semi-final victors will compete in the finals in March in hope of winning tickets to the FA Cup final at Wembley.

There were so many inspiring stories: from the team made up of African students in Portsmouth, the Shakespearean rapper who helped turn his life around through football, how Jan found Walking Football after a bad injury, and Marcus, who gathered a team together at the very last minute.

You will be able to watch a special highlights programme featuring the best of the first-round action and stories on the red button on Saturday, 30 January at 13:00 GMT - straight after Football Focus.

Here are just a few images from the hundreds that were taken at the weekend. You can find more by searching #PeoplesCup on social media.