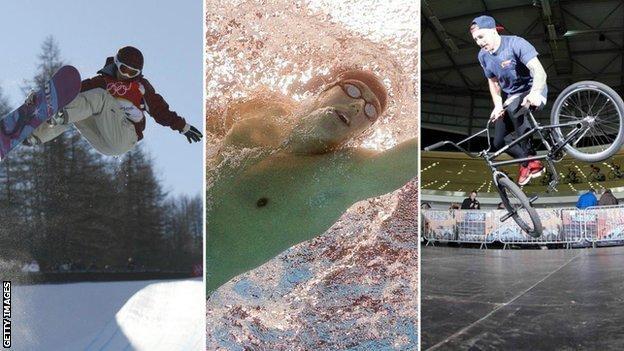 Commonwealth Games gold medallist Robbie Renwick believes the opportunities given by sport outweigh any sacrifices he has had to make.

Renwick was at a BBC Get Inspired Q&A alongside Olympic snowboarder Lesley McKenna and BMX expert Keelan Phillips.

"I really don't like the word sacrifice," he told the audience of 16-18 year olds in Dundee.

"I've been given so many opportunities that I would never, ever have done if I wasn't for swimming."

The two-time Olympian was answering questions at the Dundee International Sports Centre, at a BBC Get Inspired event hosted by comedian Sanjeev Kohli.

Scores of young people spent the day trying out a variety of sports at the BBC Active Academy.

"I travelled around the world, competed against the best swimmers in the world," said Renwick. "How many 27-year-olds can say they've done that?

"It's a case of keeping a balance in your life, not sacrificing anything at all."

'Having fun is key'

Renwick, who is pushing for a place at the 2016 Rio Olympics, said enjoyment is the main ingredient for success.

"If your parents are pushing you into something you're not going to enjoy it.

"There are so many fantastic sports out there - don't just follow suit and go into football, give other sports a go."

Described as a breakdancer on a bike, Keelan Phillips is the UK's top flatland rider. The Leicester-based BMX expert has won contests around the world and his films get watched by up to half a million people.

Asked how he coped with the pressure of competition, he admitted he had resorted to unusual methods.

"I hate competing," he said. "I used to get nervous a lot. Everything's on the line. I went to get hypnotised and it worked. I get less nervous now."

'Do it for yourself'

It was mastery of a snowboard that saw Lesley McKenna become a three-time Olympian and winner of two World Cup events. She now coaches the next generation of world-class snowboarders.

The 41-year-old urged people to stick at a sport, arguing enjoyment is more important than success when you are young.

"We do see a massive drop-off around 14 15, and people have the perception you've got to be really successful at something to keep doing it.

"But if it's fun, and you're passionate about it, there are definitely ways to stay involved. You don't have to make the national team or compete in World Cups - you can just do it for yourself."

Get Inspired Q&A hosted by Sanjeev Kohli with Robbie Renwick, Lesley McKenna and Keelan Phillips - as it happened.