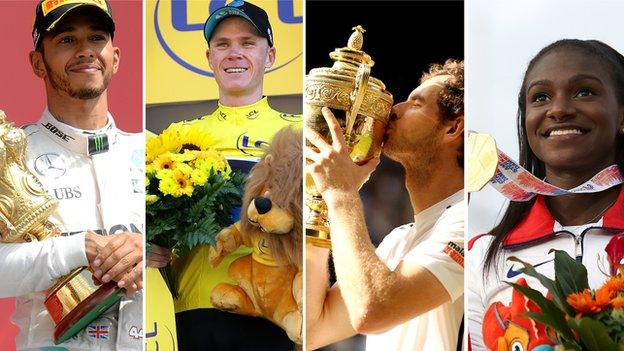 What had been called the 'best weekend of sport' produced an array of British success and memorable triumphs for other countries - and you can follow in their footsteps.

Find out how you can celebrate by taking part in sport yourself.....

SW19 was once again be the centre of attention as crowds gathered to see who would be crowned champions - but how about gracing the grassy tennis lawn yourself?

The simple pleasures of whacking a yellow ball over a net are not to be underestimated! It's addictive and easy to get involved. Many tennis clubs are currently running 'Great British Tennis Weekends' which offer cheap and often free coaching sessions and tasters days.

GET INVOLVED: Want to be the next Andy Murray or Serena Williams? Use our helpful guide to take your first steps into tennis or find an event to go along to.

The curtains came down on a month of football in Paris on Sunday when the Stade de France hosted the big showdown between France and Portugal in the final of the 2016 European Championship.

How about warming up for the big match by giving football a go? You don't have to be the next Cristiano Ronaldo to get involved. There are many options open including youth clubs, ladies teams, walking football, disability football and even volunteering.

GET INVOLVED: If you'd like to find out about getting into football - playing or volunteering - read our special guide. And you can find events to go along to here.

CATCH UP: Watch the final and any other action you might have missed with Euro 2016 Catch-Up on iPlayer.

If you feel the need for speed after Hamilton's success, there are many ways you can get involved.

GET INVOLVED: While you are unlikely to hop straight into an F1 car as your opening motorsport experience, there are many more disciplines waiting to take you on. Click here to find out which is for you.

While the big names were attempting to warm up or book their places in the 2016 Rio Olympics, you can support them by getting involved in athletics too - it's easier than you think!

Running, throwing and jumping is for everyone. Grab some props, head to the park and create your own mini athletics competition.

GET INVOLVED: Fancy dusting off your trainers and giving athletics a go? Here are some tips to get you started and events to go along to.

CATCH UP: Read all the reports on the athletics index.

Football was not the only draw in France at the weekend. The Tour de France continued through the Pyrenees with Britain's Chris Froome winning stage eight on Saturday to take the yellow jersey and retained it after stage nine on Sunday.

Cycling may seem like hard work watching the likes of Froome and Thibaut Pinot tackle the torrid French route but it's actually a simple sport to get into.

It's easy to do, gets you from A to B, and exhilarating to boot. There is less risk of injury than many other sports and an hour-long road race can burn up to 844 calories.

GET INVOLVED: Inspired to get on your bike? Take a look at this handy guide to find ways to get into cycling and some events to take part in.

CATCH UP: Hear what you might have missed with BeSpoke at the Tour de France podcasts.

But it's not just Europe which was hosting big sporting events this weekend. Over in the United States it was the biggest event in women's golf as the US Open took place at CordeValle, San Martin (returning to California for the first time since 1982).

If you've never thought of taking up the relaxing sport of golf there couldn't be a better time as many golf clubs are running special 'Get into Golf' sessions.

GET INVOLVED: Fancy giving golf a go this weekend? Here's our guide. and some events to go along to.

CATCH UP: Read all the reports from the weekend on the golf index.