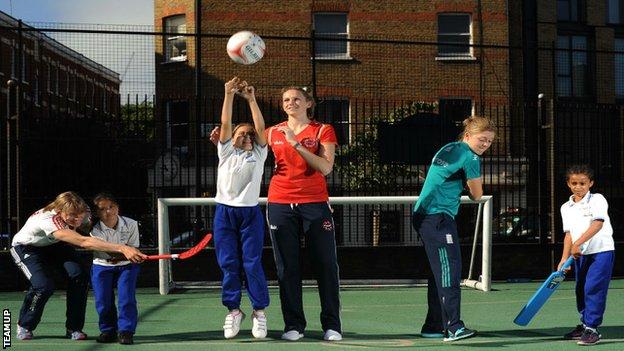 Women's team sports are set to be boosted as three of England's top teams have joined forces in a new campaign to get more girls and women into sport.

The England and Wales Cricket Board (ECB), England Hockey and England Netball have launched TeamUp, a three-year campaign to maximise the legacy of three home World Cups and build a fan base for women's team sports.

Through TeamUp, teachers from primary and secondary schools can access free training and support resources to bring the sports to their school.

Research shows the huge impact of team sport on the development of communication skills, leadership and teamwork

Launched as part of Women's sports week, the aim is to reach 150,000 girls aged seven to 13 across the country and give them the opportunity to experience the benefits of team sport.

With the UK playing host to World Cups from all three sports in the coming years, it is hoped more girls and women will be inspired to grab a cricket bat, hockey stick or netball and start playing.

"More women and girls are getting active and getting involved with team sport than ever before," said Clare Connor, director of England Women's Cricket at the ECB.

"Over the next three years we have a uniquely wonderful opportunity to develop this growth further.

"The three consecutive World Cups, starting with the ICC Women's World Cup in 2017, present a perfect platform to inspire the next generation of cricketers, hockey players and netballers.

"It is our responsibility to convert this opportunity into something truly memorable."

The ICC Women's World Cup starts on 26 June 2017, and is being held through England.

Following that, London will host the Women's Hockey World Cup in July 2018 and the Netball World Cup will be coming to Liverpool in June 2019.

"Research shows the huge impact of team sport on the development of communication skills, leadership and teamwork."

For more information about TeamUp or to register your school click here.