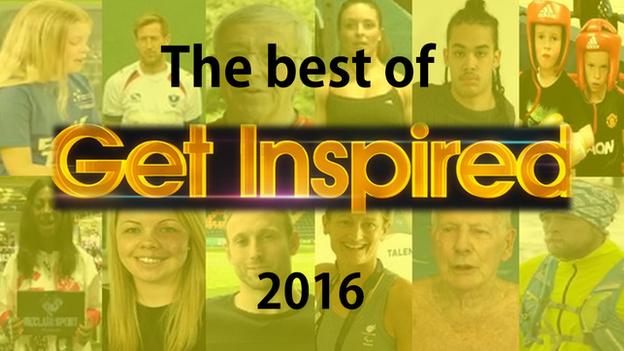 It's been a jam-packed year for the Get Inspired team.

From the Rio Olympics and Paralympics, London Marathon and FA People's Cup to our fantastic campaigns Body Positive and Make Your Move, we've aimed to get the nation active by bringing you the most inspirational stories from members of the public with an extraordinary passion and dedication to sport.

With 2017 just around the corner, we're taking a look back at our favourite moments to give you the ultimate collection of Get Inspired stories from the past 12 months.

So sit back, relax and Get Inspired...

Andy Murray gets a right grilling!

We love the cheeky questions these two aspiring journalists asked Wimbledon champion (and now world number one and three-time BBC Sports Personality of the Year winner) Andy Murray. Find out the naughtiest thing the tennis star did as a kid, who inspired him when he was young, and much, much more in this fun interview.

Remember the craze when women would post a selfie on social media without any make-up on? Well, when Amy Elsegood revealed her no make-up selfie, she inspired women from all over the world. Watch this beautiful clip from our Body Positive campaign.

Can his kids fix it? Yes they can!

Geoff Whitington had Type 2 diabetes, was overweight and at risk of losing his foot through Charcot foot. Little did he know his life was about to take a dramatic turn for the better when his kids decided enough was enough and it was time to fix dad!

Kids and their pets set hearts on Olympic gold

Four sporting years seemed to pass in the blink of an eye between the sensational London 2012 Olympics and Rio 2016. But after another record-breaking medal haul for Great Britain, we looked at how our success in the Games has inspired the next generation of sporting stars - both human and animal!

A century of handstands!

A 100-year-old man does handstands underwater. Need we say more?

Sport can help us through the toughest times...

A truly remarkable story of a woman who, after facing the scariest moment of her life, was able to channel her fear and trauma into powerlifting. And it turns out she is pretty awesome at it!

Some rugby players are familiar with breaking bones, pulling muscles and even the odd knockout. But what's it like to deal with all that and suffer from diabetes? We followed Worcester Warriors full-back Chris Pennell to find out how he juggles rugby with keeping his blood-sugar level stable.

It was another busy night at the 2016 BBC Sports Personality of the Year, with boxing club founder Marcellus Baz named the BBC Get Inspired Unsung Hero.

The award celebrates outstanding contributions from those who volunteer their time and effort to help with the development and running of grassroots sports.

Here's another chance to take a look at the people you nominated from your local area.

Man of the match!

This season's FA People's Cup had it all. From thrilling penalty shootouts to unexpected victories, the Get Inspired team can't wait to see what next year's tournament will hold (by the way, you can sign up for the FA People's Cup 2017 from 2 January).

And who can forget this stunning goal from Pompey Amputees team member Ray Westbrook? We're not surprised it went viral!

The volunteer who strove for gold - and succeeded

After two painful cycling-related injuries, Anne Dickins thought her days of competitive sport were over. But when she landed herself a job as a physiotherapist at London 2012, little did she know it would be the start of a new, shiny gold challenge.

When 400 marathons isn't quite enough

Many love a good mass-participation event - and they don't come much bigger than the London Marathon. But when most people have trained ruthlessly in the lead-up to the big day (knowing that they can collapse in a heap afterwards), one man had 400 - yes FOUR HUNDRED - to worry about. Watch his incredible story below...

Ben's efforts were also recognised at the BBC Sports Personality of the Year award ceremony where he was given the Helen Rollason Award.

And finally, Christmas came early in Birmingham thanks to the BBC's Reclaim Sport project.

More than 80 schools and community sports clubs across the city received sports donations - meaning thousands of children can enjoy sport with the kit they need. And you can see just how much it meant to this Birmingham school from the reaction of their sports coach below...

If you've been inspired by any of our stories and want to try a new sport, visit our activity guides for all the information you'll need!