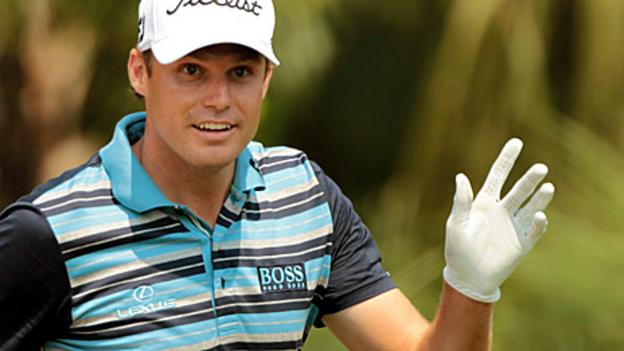 Nick Watney hit a sensational eight-under-par 64 to take the first-round lead at the Players Championship.

The American sank nine birdies and an eagle in a round that also included a double bogey on the 14th, to lead by one shot from Lucas Glover (65).

Germany's Martin Kaymer, who needs a top-two finish to return to world number one, is on five under with Northern Ireland's Graeme McDowell.

English pair Brian Davis and Luke Donald are three under.

Two-time major winner Mark O'Meara rolled back the years with three birdies in his final four holes to move into third place on six under.

The 54-year-old was among the later starters, who were not expected to challenge clubhouse leader Watney as the strengthening breeze made playing conditions at the Sawgrass course harder, but he was joined on six under by David Toms.

Watney's 64 was one outside the course record, while former US Open champion Glover, who won at Quail Hollow last week, continued his good form with six birdies and an eagle.

The American's only blemish came at the par-five 16th when he dropped a shot after hitting his second into the water.

In the absence of world number one Lee Westwood, Donald could move to the top of the rankings if he wins in Florida.

And the Englishman produced a solid bogey-free round, picking up three birdies, including one on the famed par-three 17th with the island green.

Kaymer could also return to number one if he can engineer a top-two finish and the German did his chances no harm, birdieing three of the first four holes on his way to a share of third with South Africa's Rory Sabbatini and Sweden's Fredrik Jacobson.

Kaymer was playing with former world number one Tiger Woods, who was forced to withdraw through injury after nine holes.

"I was more focused on my game to see if he was in pain," said the German.

"He hit a few good shots, but a few that were bad. Obviously it's very sad for us - it would have been another 27 holes with him and he pulls the crowd. We can just hope he gets well soon."

On his own round, which featured seven birdies and two bogeys, Kaymer added: "I played so much more solid than I did last week when I had to think about every single shot.

"I just played and let it go."

Late starter Alvaro Quiros of Spain defied the strengthening wind to birdie the last three holes and also card a 67.