Phillip Price admits he got "lazy" when his world ranking dropped to four figures - but his career has been revived by life coach Alan Fine.

The 2002 Ryder Cup hero has fought back from retirement thoughts and his joint 12th at the Wales Open was his fourth top 15 finish in the last year.

"Alan's advice is simply every time I play poorly I'm not allowed to think about retiring."

He added: "I have to move on and practice for the next event whereas when I played poorly before I'd dwell and think about retiring for days and days."

Price earned a five-season European Tour qualifying exemption after winning the European Open in Ireland in 2003.

But the Welshman failed to achieve a top 20 finish between a tied 14th for the Spanish Open in April 2007 and a 13th at the Czech Open in August 2010.

The three-time European Tour winner revealed he considered quitting golf during his rankings slide as he dropped to over 1,000 in the world.

Price, 76th in the European Tour's Race to Dubai rankings, now travels to Sunningdale on Monday as the rejuvenated Welshman bids to qualify for his first Open since the 2006 Championship at Royal Liverpool. 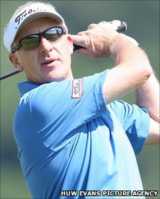 I thought I could just swan around and still play well. I burned my fingers

But Price will join fellow countrymen Stuart Manley, Bradley Dredge and Jamie Donaldson at international final qualifying at Sunningdale in the hope of joining Davies at Europe's prestigious major.

Price has moved up to 360 in the world helped by top 10 finishes at the Alfred Dunhill Links Championship and last month's Spanish Open and his tied 12th at his home Twenty Ten course at Celtic Manor on Sunday.

"The progress I've made over the last six months has been huge and I've consolidated that here [at the Wales Open]," Price said.

"My confidence in general is very good and my finish at the Wales Open is just another boost to it.

"I really love to play The Open and I think I have a good chance of qualifying.

"I miss playing the majors - and I like Royal St George's. I played well there in 2003 (tied 10th) so I'm highly-motivated to get there again."

Price was a top 50 player when he qualified for the European Ryder Cup team for the 2002 showpiece at The Belfry.

The Welsh rookie then shocked the then world number two Phil Mickelson in their singles match to help Europe beat the United States.

But his form plummeted as Price acknowledges: "I had an exemption and was a little lazy.

"I didn't do what I needed to do to be a top player.

"You need to do the long-haul travel at the start of the year to be ready for the summer but it got to the stage where I didn't want to do that.

"I probably didn't expect to pay such a high price. I thought I could just swan around and still play well. I burned my fingers.

"I took playing well for granted, I had been reasonably successful and I didn't want to do the hard work.

"But when the exemption run out it was either I start knuckling down to turn it around or do something else.

"Keeping my European Tour card last year was probably my biggest ever achievement because I was so bad."

As well as taking a different approach to practice, Price thought it was also a case of mind over matter so sought the help of old friend Fine.

"Days like these at the Wales Open justify my decision to carry on," said Price.

"I don't look like winning but I've had some top 20s and a fifth place.

"The last five years have shown me I actually want to play golf. And when it was nearly taken away, I realised how much I love it. But anything I get this time in my life is a big bonus."