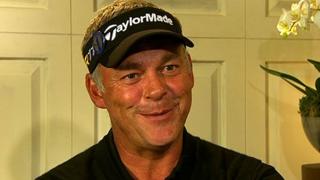 Following his maiden major win, the 2011 Open champion Darren Clarke tells BBC Sport that his victory celebrations will go long into the night.

The Northern Irishman fired a final-round 70 to finish five under to hold off Americans Phil Mickelson (68) and Dustin Johnson (72).

Clarke, playing in his 20th Open Championship, is the first winner from the UK since Paul Lawrie in 1999 and becomes only the second Northern Irishman to win the Open after Fred Daly in 1947.