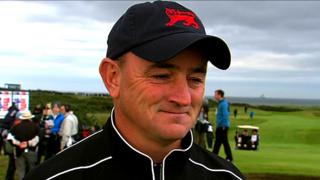 Great Britain and Ireland team captain Nigel Edwards pays tribute to his players following their victory over the United States in the Walker Cup.

It is the first time since 2003 that GB and Ireland have won the biennial competition.

Steve Brown sealed the win by halving his match with Blayne Barber to reach the unassailable score of 13.5 points.