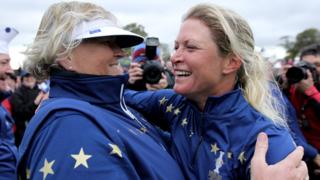 Britain's Laura Davies delights in the "best" Solheim Cup win of her career with Europe snatching a dramatic 15-13 victory as the last three singles matches all swing their way to take the trophy for the first time since 2003.

Norway's Suzann Pettersen beat Michelle Wie despite being one down with three to play, before Swede Caroline Hedwell won the last two holes to tie her match with Ryann O'Toole, which meant that Spaniard Azahara Munoz's one-hole win over Angela Stanford clinched the trophy.

The 47-year-old Davies, the only European player to compete in all 12 Solheim Cups, won her own singles match against Juli Inkster to help Europe to only their fourth victory in 12 contests.