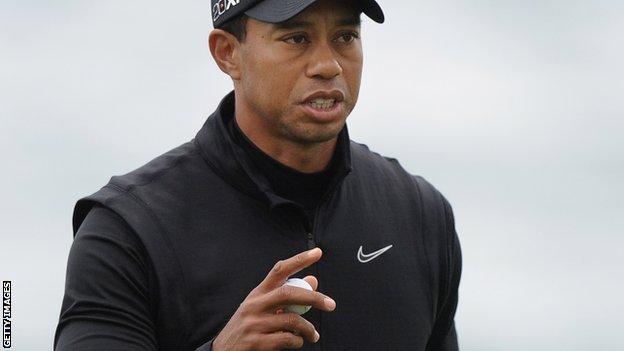 Tiger Woods registered five birdies in six holes to charge up the leaderboard at the Pebble Beach National.

The former world number one carded a five-under 67 to end the third round on 11 under, four shots behind South Korea's Charlie Wi, who is chasing his first USPGA tour win.

Between them in second place is American Ken Duke on 12 under.

Englishman Greg Owen is a shot further back.

Woods - taking part in the California event, which is played over three venues, for the first time in a decade - created a stir with his run of birdies on the Pebble Beach course.

However, he had to settle for seven pars to end his round, denting his hopes of a first tour title in more than two years.

Wi was steady throughout his three-under-par round of 69 at Spyglass Hill, while Duke's five-under 65 at Monterey Peninsula was bettered only by compatriot Ryan Palmer's 64.

Although Phil Mickelson briefly threatened, he struggled on Pebble Beach's par fives to shoot a 70, leaving him six shots off the pace heading into the final round.