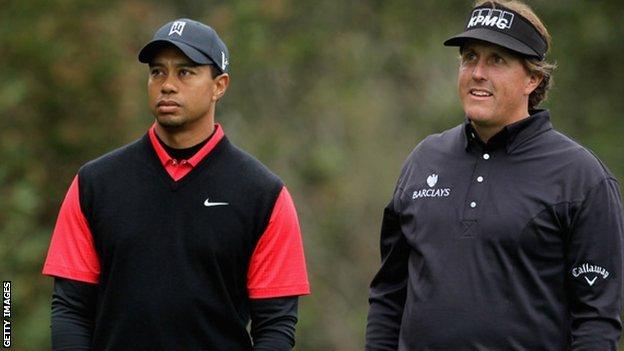 Phil Mickelson shot a flawless eight-under-par 64 to overturn a six-shot deficit and win the Pebble Beach Pro-Am by three shots on 16 under par.

The American hit three birdies and an eagle in his first six holes to wipe out the overnight lead of Charlie Wi, who dropped four shots early on.

Wi closed with three birdies to finish with a 72 to end second on 15 under.

Tiger Woods bogeyed the final three holes on the front nine on his way to a 75 as he dropped back to eight under.

"It just feels great to win this tournament," Mickelson, 41, said.

"It's a special place for me, Pebble Beach, and to have a win here, where my grandfather caddied, feels awesome.

"I felt like my game was so close heading into the season, and yet my scores didn't reflect how I felt I was playing.

"To put it together this week, especially the final round, just feels terrific. It gives me a lot of confidence but also inspires me because I believe what I'm doing is correct and that I'm able to play some of my best golf."

The former world number one opened with five pars and a birdie but a run of bogeys on the seventh, eighth and ninth left him struggling after his playing partner Mickelson had enjoyed a fast start.

Mickelson birdied the second and fourth holes to draw level with Woods. A further birdie on the fifth, followed by an eagle on the sixth, catapulted him to the top of the leaderboard as Wi, who four-putted the first to drop two shots, let further shots go on the fifth and sixth.

Woods rolled in a 13-foot putt for par on the 10th to stop his run of bogeys, then looked set to make a significant inroad into Mickelson's lead on the 12th.

The 14-time major winner holed a bunker shot for a birdie on the par-three but his hopes of a two-shot swing were abruptly ended when Mickelson drained a 30-foot par putt to stay four clear of his playing partner.

Mickelson then knocked in birdie putts from two and six feet on the next two holes to further extend his advantage, while Woods bogeyed the par-five 14th after a wayward approach.

Woods dropped another shot on the 15th to drop back to eight under, while Mickelson rolled in another long putt for par to maintain his bogey-free round.

And the left-hander finished with a flourish with a four-foot birdie on the last.

"I didn't hit it as bad as the score indicated but I putted awful," said Woods. "As good as I felt on the greens yesterday was as bad as I felt bad today.

"And consequently I made a ton of mistakes on the greens."

South Korean Wi closed with a trio of birdies to jump above American Ricky Barnes, whose five-under 67 saw him finish third on 13 under.

Ireland's Padraig Harrington overcame a double-bogey seven at the second to finish with a two-under 70 - and tie for seventh on 10 under.

American Kevin Streelman had a run of five birdies in eight holes to briefly threaten but he bogeyed the 16th and 17th before dropping two more shots at the last to fall back into a tie for ninth alongside England's Greg Owen (70) on nine under.