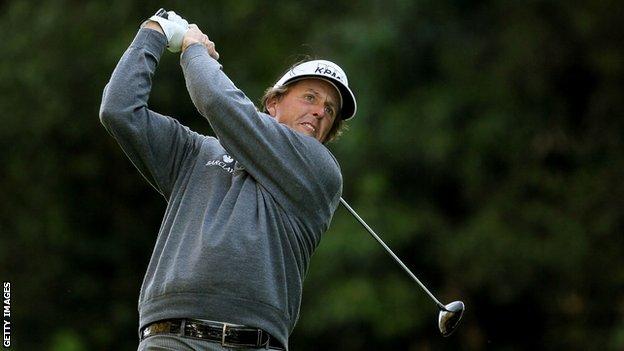 Phil Mickelson continued his excellent recent form to retain his lead at the Northern Trust Open after the second round in California.

The American left-hander, who won this month's Pebble Beach Pro-Am, shot 70 to reach the halfway mark at six under, the leader by one shot.

He holds a one-stroke lead over Pat Perez, who carded a 65 to finish at five under.

Mickelson said: "I probably didn't play the greatest today, but I was able to kind of salvage a good round and had a good break on eight where I holed out from the fairway; that was a nice little bonus.

"I've got to go out and shoot some low scores, because they're out there. But I gave myself an opportunity.''

Australian Jarrod Lyle also shot a 65 to leave him in a group of five golfers two strokes out in third, along with America's Jimmy Walker (66), Matt Kuchar (69) and Jonathan Byrd (70), and Sweden's Carl Pettersson (70).

Perez, 36, and Walker, 23, both managed six birdies in their rounds.

England's Justin Rose is now two under after shooting another 70 and Luke Donald is level par after carding 72.

The tournament is Donald's first on the US PGA Tour in 2012, and the world's top-ranked golfer is struggling to find his form. Donald missed the cut at the event last year.