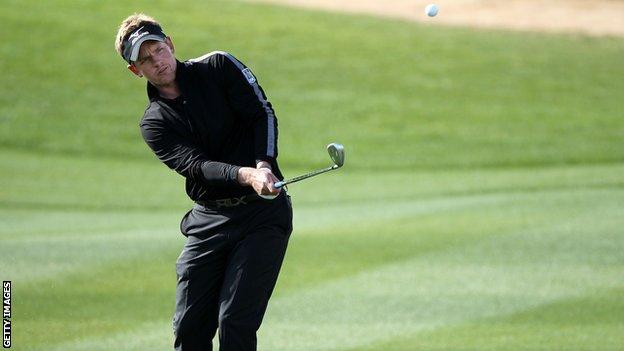 World number one Luke Donald has been drawn to meet three-time major winner Ernie Els in the WGC Match Play this week.

Donald, the defending champion, will be hoping to reproduce his incredible 2011 form when he won all six of his matches before the 18th hole.

Donald, whose success came a year after his fellow Briton Ian Poulter won the tournament, needs to forget his disappointing showing in the Northern Trust Open last week.

The Buckinghamshire-based golfer slumped to a 56th-place finish, carding 78 in his final round.

"I certainly have good feelings going back to Dove Mountain," he said.

"I have a pretty good matchplay record but you just never know with that format.

"I just try to be pretty good at not giving too many shots away, too many holes away, keeping the pressure on my opponents and taking it one match at a time.

"I have always had that inner belief that I could certainly play as well as I did last year and it's nice to see the hard work paying off but I feel like there is a lot more for me to achieve.

"There is a slight added burden of expectation but I feel I've dealt with that pretty well so far."

Donald's nine-month run at the top of the world rankings could end if Northern Ireland's US Open champion Rory McIlroy wins and Donald goes out before the third round.

Rory McIlroy was ranked 876th in the world when he turned pro three and a half years ago. He is now number two in the list.

And Lee Westwood could reclaim the number one spot if he wins and Donald fails before the quarter-final stage.

McIlroy, 22, was relaxed about the prospect of topping the rankings.

"The rankings are sort of a by-product of what you do," he said.

"I'd rather just concentrate on trying to win tournaments and trying to improve as a player.

"If I happen to do that, then hopefully the ranking will take care of itself."

Westwood will need a major improvement on past showings in the contest, having never got beyond the second round previously.

"Sometimes I have not played well enough or just run up against somebody who is playing hot, but it's very strange when you look at my record in the Ryder Cup and that I won the matchplay at Wentworth," he added.

The tournament takes place from 22-26 February.