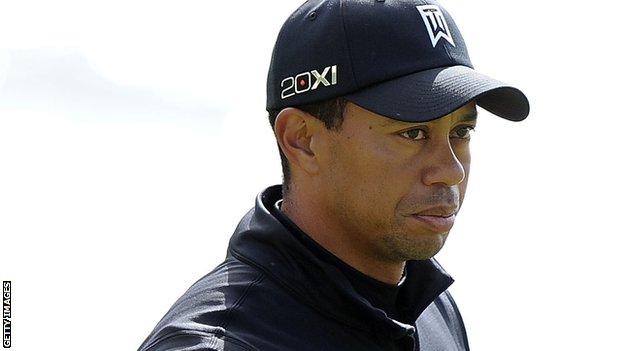 Tiger Woods made a typically confident retort when told Gonzalo Fernandez-Castano believes he can knock out the former world number one in the first round of the WGC Match Play in Arizona.

Fernandez-Castano said he "doesn't think Woods is at his best" and "if I play well I can beat him" in a pre-tournament news conference at the Dove Mountain Resort, near Tucson.

When these comments were put to the three-times Match Play champion, Woods replied: "I feel exactly the same way as he does. I feel he's beatable, too."

You don't always have the marquee names on the final, but that's the nature of the format

In his last two tournaments Woods has failed to capitalise on potentially winning positions.

He was eclipsed by England's Robert Rock at the Abu Dhabi Championship and at Pebble Beach slumped to a closing 75 in the company of Phil Mickelson, who surged to victory with a final round 64.

"The past Sunday was awful," admitted Woods, who knows this week's 18-hole knockout tournament can generate a surfeit of shock results.

"Any guy can win any match. We've seen that over the years," Woods said. "That's what makes it interesting for us players - and I'm sure for the fans as well.

"You can see guys go out and play well and go home. You don't always have the marquee names on the final, but that's the nature of the format."

Fernandez-Castano is bidding to emulate Thomas Bjorn's achievement of last year when he beat Woods in the first round here.

"He's probably not at his best and you have to look at it that way," the Spaniard said.

"Maybe it's a good chance to play good, and maybe I can beat him. That would be a great feeling.

"I know I need to play good, because he's a great matchplayer. He's won this tournament three times and he has a very good matchplay record."

Top seed Luke Donald begins his title defence against Ernie Els in the knowledge that his near nine-month reign at world number one might end this week.

Lee Westwood and Rory McIlroy could usurp the Englishman if either were to win the tournament.

In the event of a McIlroy victory, Donald would need to reach the third round to remain number one.

A Westwood win would take him back to the top of the rankings if Donald does not reach Saturday's quarter-finals.