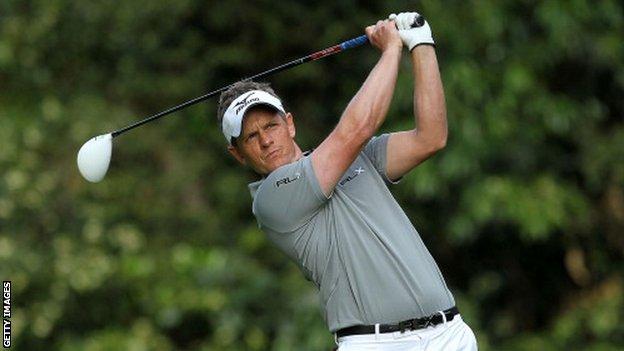 World number one Luke Donald is out of the WGC Match Play in Arizona after losing to Ernie Els in the first round.

Donald's exit gives Rory McIlroy or Lee Westwood, who both progressed, the chance to take over as number one.

Three-time winner Tiger Woods continued his resurgence by edging through - 1 up - against Gonzalo Fernandez-Castano.

Donald, the defending champion, said: "I'm not sure where to start. I just didn't play very well. It's disappointing. I've been working really hard.

"I struggled. I gave away too many holes and made too many mistakes. You can't do that in matchplay against anyone, let alone Ernie."

Donald will lose his number one ranking if Northern Ireland's McIlroy or Englishman Westwood win at Dove Mountain.

World number two McIlroy trailed South Africa's George Coetzee one down at the turn, but won four successive holes from the 11th.

They ultimately provided enough of a cushion for the US Open champion, who won one up despite losing the 16th and 17th.

We both made our share of mistakes, there's no doubt about that, but somehow I was able to move on

Westwood, who has lost in the opening round four times and never gone beyond the third round in 11 previous appearances at the event, beat Belgian Nicolas Colsaerts 3&1.

"I played really well," said the world number three. "I didn't give a hole away, didn't make a bogey. It was a good, honest, solid match."

In the second round, Westwood plays Robert Karlsson, who hammered fellow Swede Fredrick Jacobson 6&5, while McIlroy will take on Denmark's Anders Hansen.

Northern Ireland's McDowell was beaten 2&1 by YE Yang despite leading after five holes.

Birdies from Yang on the next two, plus a double bogey from McDowell on the ninth, saw the South Korean take control.

"I ran into a man that played extremely well," McDowell admitted. "I felt like I had to follow him all day long, and I did most of the day, but he didn't put a foot wrong.

"I made six birdies. You just run into the wrong guy on the wrong day, and you have got your work cut out. I didn't take care of business, so I'm disappointed."

Reigning Open champion Clarke won only one hole - an eagle at the eighth - in losing 5&4 to American Nick Watney.

Former world number one Woods will play Watney after coming through a tough match against Fernandez-Castano, taking the lead only when the Spaniard bogeyed the 16th.

Woods said: "We both made our share of mistakes, there's no doubt about that, but somehow I was able to move on."

Rose, who has now suffered three first-round defeats in his last four appearances at the lucrative tournament, tried to fight back but Lawrie won by one hole to set up a second-round match against Japan's Ryo Ishikawa, who triumphed over America's Bill Haas by the same scoreline.

Scotland's Martin Laird beat Spain's Alvaro Quiros 1 up, but England's Ian Poulter was beaten 4&3 by Sang-Moon Bae. The Korean profited from Poulter bogeys on the 11th, 12th and 14th to set up a clash with 2011 Masters champion Charl Schwartzel.

The disappointing run of first-round results for English players continued when Simon Dyson went down 4&3 to Australia's John Senden.

But Robert Rock, who won the Abu Dhabi Championship last month, bucked the trend by finishing 1 up against Australian Adam Scott. His reward is a match with Mark Wilson after the American saw off the challenge of compatriot Bo Van Pelt.

Results (US unless stated):