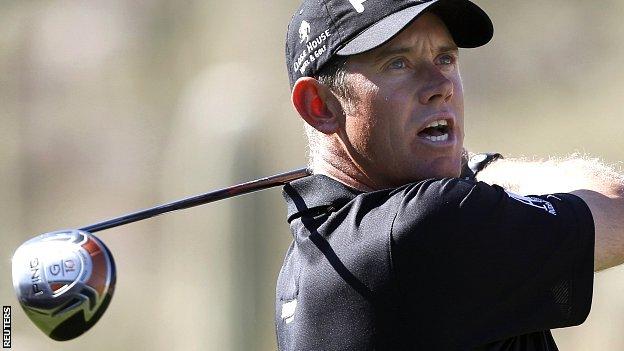 Lee Westwood and Rory McIlroy remain on course to claim the world rankings top spot at the WCG Match Play after reaching the third round in Arizona.

Westwood beat Sweden's Robert Karlsson 3&2 to set up a meeting with Nick Watney, who defeated Tiger Woods 1 up.

The Northern Irishman, who is second in the world rankings, leads the chase to overhaul Luke Donald - beaten in the first round - at the top of the standings, and he or Westwood will become world number one if either wins this tournament.

Englishman Westwood was five clear after 10 holes and seemingly cruising to victory over Karlsson, but made a mess of the 11th and was pegged back further when the Swedish Ryder Cup player chipped in for an eagle at the 583-yard 13th.

Westwood was in the desert scrub again off the tee at the driveable 15th and Karlsson did not even have to putt to reduce the deficit to two holes.

However, Westwood's par on the short 16th was good enough when Karlsson failed to get up and down from a bunker.

Northern Irishman McIlroy reached the turn one up against Denmark's and went further ahead on 14 when he chipped in. The next two holes were halved, sealing the US Open champion's passage into the third round.

Woods, however, missed a makeable birdie putt on the final green that would have taken his match with Watney to an extra hole.

Watney admitted Woods "didn't putt like we are all used to seeing him putt".

Martin Laird and Paul Lawrie will meet in an after completing memorable wins.

Laird, who is based in Arizona, carded eight birdies in a highly impressive 2&1 victory over 18-year-old Italian Matteo Manassero, while Lawrie edged Japan's Ryo Ishikawa 1 up.

Second round results (US unless stated, UK players in bold):