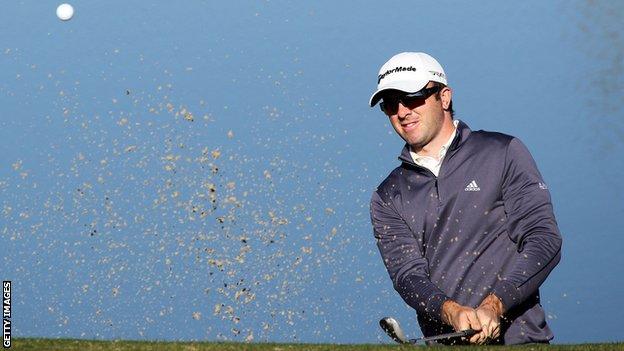 Martin Laird and Paul Lawrie will meet in an all-Scottish last-16 tie at the WGC Match Play in Arizona after completing a pair of memorable wins.

Laird wrapped up a 2&1 victory over Italy's Matteo Manassero.

And Lawrie edged Japan's Ryo Ishikawa 1up to book his place in round three.

Woods will be left to rue a missed five-foot birdie putt on the 18th - which would have taken the match into a sudden-death play-off - as well as several other makeable birdie chances during the back nine.

Laird, who is based in Arizona, carded eight birdies in a highly impressive performance against 18-year-old Manassero.

"I needed all of them. That was a great match," said the 29-year-old Glaswegian. "That's as good as I've played in a while."

Lawrie, meanwhile, followed up his first round victory over England's Justin Rose by taking out 20-year-old Japanese star Ishikawa, again on the final green.

He explained: "The positive is that I'm hitting the ball good, but I'm struggling a bit with the blade [putter].

A quarter-finalist on his debut in the event 12 years ago, when he was the defending Open champion, Lawrie is making his first appearance at the lucrative matchplay event since 2003.

Winner of the Qatar Masters earlier this month and on course for a return to the Ryder Cup side after a 13-year gap, the 43-year-old from Aberdeen was one ahead on three separate occasions before finally going two up when Ishikawa bogeyed the ninth.

His opponent refused to let him get away, though, and Lawrie's bogey on the 17th meant it went the distance.

Ishikawa had a 15-foot chance on the 18th but could not take advantage to force a sudden-death play-off.

Like McIlroy, 38-year-old Westwood will go to world number one if he wins the title on Sunday, but he has never reached the third round in 11 previous attempts.

Westwood was in control against Karlsson, though, from the time he birdied the first two holes.

After 10 holes the Worksop golfer was five clear and seemingly cruising to victory but he made a mess of the 11th and was pegged further back when the Swedish Ryder Cup player chipped in for eagle at the 583-yard 13th.

Westwood was in the desert scrub again off the tee at the driveable 15th and Karlsson did not even have to putt to be only two down.

But a par on the short 16th was good enough when Karlsson failed to get up and down from a bunker.

McIlroy reached the turn 1up but went further ahead on 14 when he chipped in. The next two holes were halved, sealing the US Open champion's passage into the third round, where he will meet Spain's Miguel Angel Jimenez.

Second round results (US unless stated, UK players in bold):