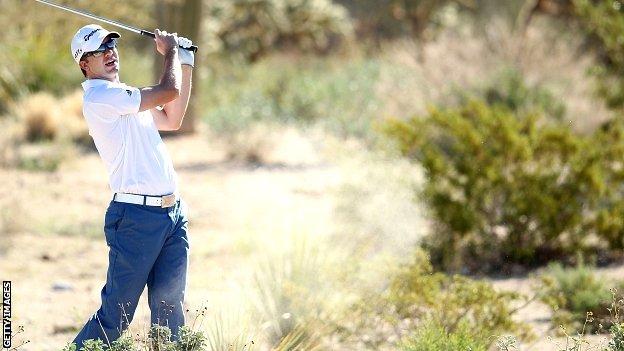 Scotland's Martin Laird is relishing his return to form at the WGC Match Play in his adopted home of Arizona.

The 29-year-old Glaswegian, now based in the United States, carded eight birdies to beat Matteo Manassero 2&1 in the second round.

"I needed all of them. That was a great match. That's as good as I've played in a while," said Laird.

Fellow Scot Paul Lawrie will be Laird's next opponent after he edged out Ryo Ishikawa 1 up.

Although it will be the first time the pair have met in competition, Laird was coached by 1999 Open champion Lawrie more than a decade ago.

"He came to a Scotland coaching session. I would have been 17 and I remember looking up to him then thinking this is where I want to go - I want to be holding the trophy like he is," said Laird.

"He's been such a good European Tour player for so long. He's definitely one of the guys I used to watch."

"The positive is that I'm hitting the ball good, but I'm struggling a bit with the blade [putter]," Lawrie said.

A quarter-finalist on his debut in the event 12 years ago, when he was the defending Open champion, Lawrie is making his first appearance since 2003 at the lucrative matchplay event.

Winner of the Qatar Masters earlier this month and on course for a return to the Ryder Cup side after a 13-year absence, the 43-year-old from Aberdeen was one ahead on three separate occasions before finally going two up when Ishikawa bogeyed the ninth.

His opponent refused to let him get away, though, and Lawrie's bogey on the 17th took the match to the final hole.

Ishikawa missed a 15-foot chance on the 18th that would have forced a sudden-death play-off.