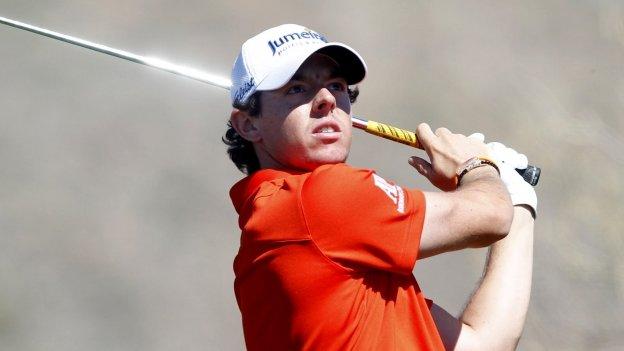 Rory McIlroy will play Lee Westwood in the semi-finals of the WGC Match Play in Arizona after both players recorded comfortable wins in the last eight.

Should either player win the tournament, they will replace England's Luke Donald as world number one.

Westwood lost the first hole against Martin Laird but beat the Scotsman 4&2 while McIlroy won three holes on the back nine to beat Sang-Moon Bae 3&2.

Hunter Mahan will play fellow American Mark Wilson in the other semi-final.

"It will be the semi-final we all wanted to see, the only shame is that it won't decide the title. Nevertheless Westwood versus McIlroy is one of the biggest matches ever seen at the WGC Matchplay. Both are desperate to win their first World Golf Championships trophy and there's the added prospect of going to the top of the world rankings. But the biggest incentive for these two rivals is simply the desire to beat each other. McIlroy has improved with each round while Westwood has maintained a consistently high standard all week. This is largely based on a significantly improved short game."

McIlroy rolled in an eight-foot birdie putt to take the first hole but hit his tee shot on the par-three third into the lake as Bae squared the match.

The 22-year-old then birdied the eighth to go one up but Bae was level again when his par was good enough to win the 10th.

However, McIlroy won three of the next five holes to move clear and Bae conceded defeat on the 16th green after failing to hole his bunker shot.

"For the most part I felt I played pretty well," said the US Open champion. "I hit a couple of loose drives, but apart from that I thought it was some of my best golf of the week."

Westwood also won his game on the 16th green but he was given a scare early on after Laird won the first hole.

"He started how I wanted to start," conceded Westwood. "He could have been three up after three but he gave me a couple [of holes] around the turn and you can't do that at this level."

Laird bogeyed the sixth, seventh, ninth and 10th to gift Westwood a three-shot advantage and, although the Englishman handed a hole back after three-putting the 11th, his three-shot lead was restored when his Scottish opponent took three to get out of a bunker on the 14th.

Both the semi-finals and the final will be played on Sunday and Westwood admitted he was looking forward to playing his Ryder Cup team-mate.

"I hope it will be a great match, that we both play well and make a lot of birdies," he said.

McIlroy added: "It's obviously what I wanted and I think it's the match everybody wants to see.

"I know I will need to play my best. It's going to be a big day, but I can't get too far ahead of myself. I've just got to concentrate on beating Lee Westwood and that's a tough enough task in itself."

Quarter-final results (US unless stated, UK players in bold):