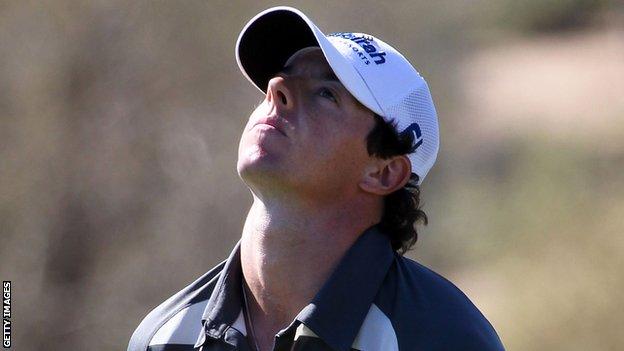 Rory McIlroy missed the chance to become world number one when he lost to Hunter Mahan in the final of the WGC Match Play in Arizona on Sunday.

The 22-year-old US Open champion from Northern Ireland fought back on the back nine before losing 2&1.

He could not repeat his heroics of earlier in the day when he recovered from three down after four holes to beat Lee Westwood in the semi-final.

"I played a great back nine but left too much work to do," said McIlroy.

"There was a little stretch around five, six, seven and eight where I lost the match."

McIlroy recovered his composure on the back nine, pulled back two holes and had a great opportunity for an eagle on the 15th but he missed the putt and Mahan held his nerve to halve the hole in three.

"When I hit the tee shot on 15 I thought 'here we go' but Hunter made a good up and down and then I knew it would be tough after that," said McIlroy.

"I'm happy with how I'm playing and hopefully it's only a matter of time before I win."

It was as though the rigours of overcoming Lee Westwood in the semi-finals had a draining effect on McIlroy. Mahan played the best golf of the week and is a deserving champion. In what is a case of when rather than if, McIlroy will have to wait a little longer to go to the top of the world rankings.

Now he is looking forward to the Masters, which starts on 5 April. He said: "I can't wait. That's what I'm building up to. I've got two events before the Masters and it would be nice to get a couple of good results before that."

Mahan was delighted with the way he held off one of the world's best players.

"I felt great with my game coming in," he said. "Rory is a great player, the best in the world right now. I knew he was going to make a charge and I'm pretty pleased with the way I held on."

The final was all-square after five holes but then Mahan took control by winning the next three holes.

Mahan birdied the sixth and then took advantage of McIlroy's double-bogey on the seventh and bogey on the eighth.

The American birdied the 10th to go four up before McIlroy finally found some magic by chipping in on the par-five 11th for an eagle.

McIlroy then birdied the 13th, only to watch the Californian roll in an eight-foot putt, after chipping out of a bunker, to halve the hole.

The Northern Irishman birdied the 14th - this time Mahan could not match him - to reduce the deficit to two down.

The next three holes were halved and Mahan took the title on the 17th.

McIlroy went behind on the second, found a greenside bunker on the third and then the greenside rough on the driveable fourth, as Westwood went three up after four holes.

But the world number three missed a putt from 10 feet to save par on the fifth and McIlroy birdied the sixth to bring the deficit down to one.

The man from Holywood, County Down, drew level at the par-five eighth with a birdie putt from 14 feet.

Then he birdied the ninth, 12th and 13th and, amazingly, after being three down through four holes, was three up after 13.

Westwood hit back with an eagle on the par-five 15th but McIlroy wrapped it up on the 17th.

Westwood then lost the third/fourth place play-off to Mark Wilson. He was three down after 13 but won the next two holes to set up a last-hole finish but could not hole a 20-foot putt and Wilson won 1 up.

Results (US unless stated, UK in bold):