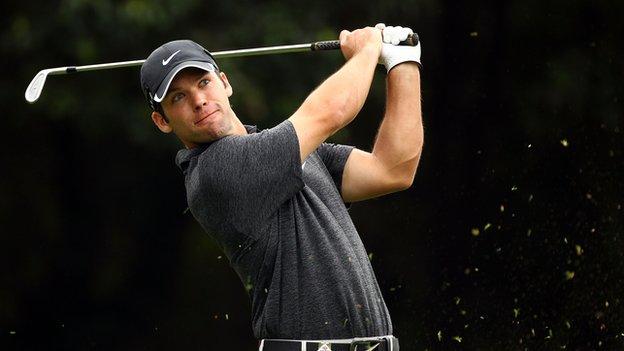 Paul Casey will make his comeback from a dislocated shoulder "fresher than ever" next week, but insists he will not give up snowboarding.

Casey, 34, was injured snowboarding in Colorado on Christmas Eve but is expected to play in the WGC Cadillac Championship in Florida.

"Golf is the most important thing in my life because it provides for the fun things I do," he said.

"100% of my effort goes into it, but I love snowboarding and mountain biking."

I need to get the physical skills up to par and then capitalise on the next 10 years. It is prime time

He added: "They're a great way of getting away from golf and not having the worries about tournament golf playing on your mind, so that will never change."

The US-based star, who has slipped to 25th in the world, was back hitting drivers in practice last week and insists he will come back a better player.

"I'm stronger and fitter than I've ever been, even with the shoulder injury, and I've got the mental game that I never used to have," he said.

"I need to get the physical skills up to par and then capitalise on the next 10 years. It is prime time.

"If I think about where I was 10 years ago I'm a completely different golfer, much more accomplished and sure of my own abilities. I'm much more knowledgeable on everything when it comes to the golfing world.

"I've got to get out there and start making the birdies and put it to good use - it's no use being in your prime if you can't go out there and win tournaments. That's the most important thing.

"The goals are still the same. It's just now a shorter time period I've got to try to accomplish the 2012 goals in."

Casey climbed to third in the world when he won the 2009 PGA Championship at Wentworth but he injured a rib at the Open later that year and missed most of the second half of the season.

He won the last of his 11 European Tour events at the Volvo Golf Champions in January 2011 but struggled with a toe injury later that year. He has also won once on the PGA Tour - the 2009 Houston Open.

His best finish in a major has been third at the 2010 Open at St Andrews and sixth on his Masters debut in 2004.

I want to be part of many more Ryder Cups. It provides great memories - the battles the pressure, the stress, the fun away from the course

"The great thing is I'm not going to miss any majors this year," he said. "I'm going to be ready for Augusta and if anything I'm going to go there fresher than I ever have."

Casey, who has played in three Ryder Cups but was overlooked as a wild card for Celtic Manor in 2010, is motivated by seeing former team-mates Luke Donald, Rory McIlroy, Lee Westwood and Martin Kaymer in the top four spots in the world.

"I watch them with the right attitude," he said. "Proud of what they are doing, but I want to be right there with them.

"I want to be competing against them and beating them, but I also admire them and try to learn from them by analysing my own game and being brutally honest and self-critical.

"I want to be part of many more Ryder Cups. For me it provides great memories - the battles you get, the pressure, the stress, the fun away from the course.

"There are moments I will cherish forever."

Casey, talking to the European Tour website, said of the accident: "I put the right arm out on the way down and heard the sound. I felt a little bit of pain and thought I should carry on at first - I thought 'why waste a good day's snowboarding?' - but five minutes later I couldn't move it and was heading back down the mountain to get it looked at.