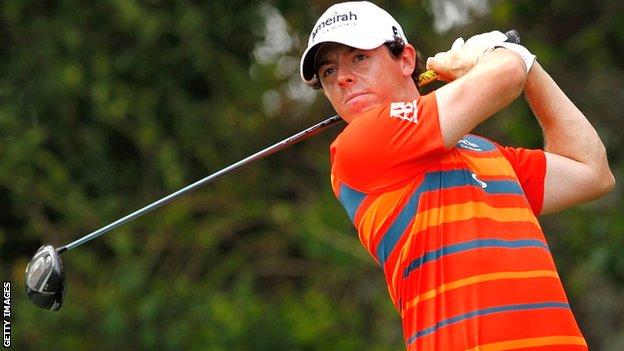 Rory McIlroy closed in on the world number one spot as a 66 gave him a two-shot lead at 11 under going into the final round of the Honda Classic.

The 22-year-old needs to win the event in Florida to overhaul Luke Donald, who is not playing this week, and combined six birdies with two dropped shots.

Americans Tom Gillis and Harris English are second on nine under, two ahead of England's Justin Rose (71) in fourth.

Tiger Woods (69) is two under while Lee Westwood (70) is a shot further back.

McIlroy, who was denied the number one ranking after event last weekend, began the penultimate round at the Palm Beach Gardens course one shot behind Rose and Gillis.

He duly struck a magnificent approach to three feet at the second, only to miss the birdie putt.

But a 260-yard three-wood soared over the flag at the next and although the eagle putt curled beyond the cup, he was left with a tap-in birdie and a share of first place.

A putt of 22 feet at the next gave him the outright lead and his imperious iron play continued at the par-three fifth when he pitched to 10 feet and calmly rolled in the putt to go two shots clear.

However, after McIlroy dropped shots at the next two holes, the lead was taken by 43-year-old Gillis, the world number 269, who is yet to win on the PGA Tour.

This is why I play golf, to put myself in contention to win tournaments and try to become the best player in the world

The American took one shoe off to hack out of mud in a water hazard and made some remarkable par saves, holing from 33 and 28 feet at successive holes.

McIlroy kept in contention by putting in from the fringe grass to birdie the 11th and, after some impressive escapes of his own to salvage par, he regained a share of the lead at the 15th after a majestic tee shot to three feet at the first of the three treacherous holes known as the Bear Trap.

The Northern Irishman was in a greenside bunker in two at the closing par-five but an assured 12-foot birdie putt gave him a useful cushion as he seeks to become the second youngest world number one after Woods.

"I've just got to try to approach it like any other tournament," he said of the task awaiting him on Sunday.

"This is where I want to be. This is why I play golf, to put myself in contention to win tournaments and try to become the best player in the world."

Rose had gone one ahead after he holed a 15-foot putt to birdie the first, only to miss four-foot putts to drop shots at the next two holes.

Woods, playing alongside Westwood for the third day in succession, briefly threatened with birdies at the third, fourth and seventh, but could not manage any on the back nine and bogeyed the 13th.

"I putted great and I was close to putting a low one up there," he said. "I felt like I could post five under par for the day or something like that and get myself within reach."

With the possibility of thunderstorms on Sunday, and winds as high as 25mph also expected, tournament organisers decided to move tee times for the final round forward.

McIlroy was due to tee off at 1030 local time in a threeball with Gillis and English.