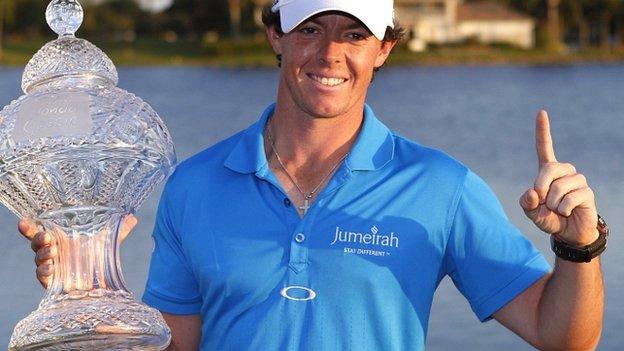 Rory McIlroy moved to the top of the world rankings after winning the Honda Classic by two strokes in Florida.

The 22-year-old from Northern Ireland showed great resolve, dropping only one shot in a final round of 69 for a 12-under-par total.

He withstood a superb final day charge from Tiger Woods, the youngest man to reach the number one spot, who had two eagles in a 62 to share second.

Lee Westwood posted five birdies and an eagle in a 63 for fourth place.

YOUNGEST TO REACH NO:1

It was a final round full of character from McIlroy, who has grown significantly in stature since imploding at with a closing 80 having led by four shots going into the final round.

The Northern Irishman becomes the second youngest player to reach number one.

"It's very special," he said. "When I was 10 or 11 I was interviewed and said I wanted to be the best player in the world and I wanted to win majors."

He claimed his first title as a 19-year-old at the Dubai Desert Classic in 2009, secured his first major at last year's and also won the in December.

Since the USPGA Championship last August he has played in 11 ranking events and finished outside the top-five in only one of them.

This season he reached the final of the World Match Play event in Arizona, in the final last weekend.

The final round was brought forward because of the threat of thunderstorms but though the conditions were breezy in the early part of the day they eased somewhat and were played out in warm afternoon sunshine.

McIlroy needed some calm up and downs from around the greens to salvage pars early in his round, and when veteran Tom Gillis bogeyed his second hole in succession at the 10th, his young playing partner had a comfortable four-shot advantage with eight holes to play.

However, McIlroy hit a wayward drive at the 12th and dropped his first shot in 23 holes when he missed from 15 feet for par.

MOST WEEKS AT NUMBER ONE

Woods, nine shots off the pace in joint 18th overnight, had collected an eagle and three birdies in his first 11 holes to move into contention.

The drama intensified when he birdied the 17th and eagled 18 in vintage fashion, to equal his best score in the final round on the PGA Tour.

Having holed a huge putt at the par-three 17th, the last of the famous Bear Trap holes, the 36-year-old landed an imperious iron shot from a hanging lie in the semi rough on the final fairway onto the front of the green and set up an eagle chance to take him within one shot of McIlroy.

He duly rolled the eight-foot putt into the centre of the hole and saluted the exuberant crowd with a trademark fist pump, but McIlroy restored a two-stroke cushion after pitching superbly from 92 yards to five feet at the 13th.

McIlroy found a perilous spot in thick rough to the right of the 14th green but produced a deft chip and run down the hill to three feet and comfortably saved par.

His tee shot at the next went left into the bunker but despite a stone near his ball he splashed out to six feet and calmly stroked in the putt.

At the 17th, another par-three with water guarding the green, McIlroy found the bunker with his tee shot but escaped magnificently again to three feet and demonstrated admirable composure once more to send the putt into the middle of the cup.

"Just as striking as the quality of McIlroy's golf is the way he has accelerated through a dramatic learning curve to develop into a player mature beyond his years. It would be foolhardy in the extreme to predict McIlroy matching Tiger's feats but it certainly feels as though we are now into a potentially lengthy era of Rory glory."

Another assured hole-out from four feet secured a closing par five and saw him replace Luke Donald as the new world number one.

Westwood, who played the first three rounds with Woods, also produced a superb final day display, a birdie chance slipping narrowly by at the 16th and another at the last for a round of 62 also passing agonisingly past.

Joint halfway leader Justin Rose had reached nine under but found the water at the 15th, the first of the Bear Trap holes, and dropped another shot at the 17th to finish with a 70 and a share of fifth.

McIlroy, who becomes the 16th player to reach the number one position, said: "First and foremost it's great to win this tournament, it's got a long history.

"It was tough today especially seeing Tiger make a charge. I knew par golf would probably be good enough and that's what I was trying to do. My short game felt great all week and definitely saved me a few times today."