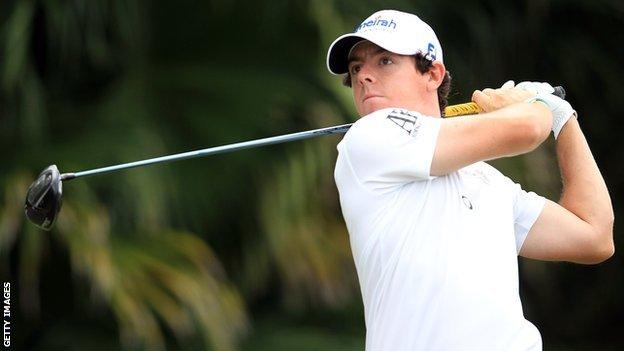 Rory McIlroy managed only a one-over-par 73 in the first round of the WGC-Cadillac Championship in Miami.

The Northern Irishman, who became world number one with victory in the Honda Classic, is seven shots behind early leaders Adam Scott and Jason Dufner.

Australian Scott said: "You know it's only a month until the Masters and this is the time you want to knuckle down and get involved."

McIlroy's score was three better than Lee Westwood, while Luke Donald, who could take the top spot back off McIlroy this week, shot 70.

Westwood's 76 probably rules him out of the victory which could have restored him to the world number one spot he relinquished to Donald last May.

The 38-year-old, whose closing 63 last week was his best round in America, bogeyed the first three holes, reached the turn in 40 and remained four over coming home.

Paul Casey, playing for the first time since dislocating his shoulder while snowboarding on Christmas Eve, also returned a 76 - as did Ian Poulter a week after being diagnosed with pneumonia.

Best of the British contingent was Justin Rose, who finished fifth in the Honda Classic, recorded four birdies in six holes from the eighth in reaching three under.

Open champion Darren Clarke improved on his recent form, only to put two balls in the lake for a triple-bogey seven at he last and a round of 74.