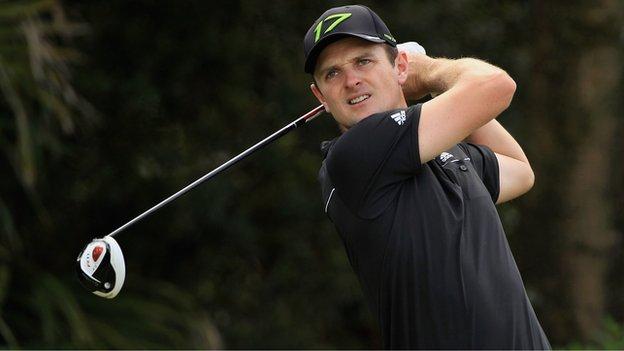 Justin Rose struck a brilliant 64 but trails American Bubba Watson, who shot a 10-under round of 62, by one shot at the Cadillac Championship in Miami.

Englishman Rose looked in top form as he followed his opening-round 69 in style to finish 11 under at halfway.

Australia's Adam Scott, joint leader at the start of play, is in third place.

Rose, who played with Watson, said: "We fed off each other's energy. I don't know if they rolled the greens after the rain, but they rolled so smoothly."

Honda Classic winner and new world number one Rory McIlroy confessed to feeling "mentally flat" in his opening 73, but started the second round eagle, birdie before two bogeys in the next three holes stalled his progress.

He recovered at the 10th and 12th - both par fives - with birdies, but is 10 shots adrift of Watson.

McIlroy was again playing with Luke Donald and Lee Westwood, the two players who could take the number one spot back from him this weekend.

Donald shot a 68 to move to six shots off the lead, while Westwood followed his first-round 76 with a 67 to finish one under.

Tiger Woods finished five under - for the round and the tournament - with a bogey-free 67.

Paul Lawrie followed up his opening-round 70 with 74 to finish even, and fellow Scotsman Martin Laird is one shot further back after a round of 73.

Darren Clarke followed a triple-bogey at the 18th on day one with a double on day two as he finished with a second successive 74 to be four over.