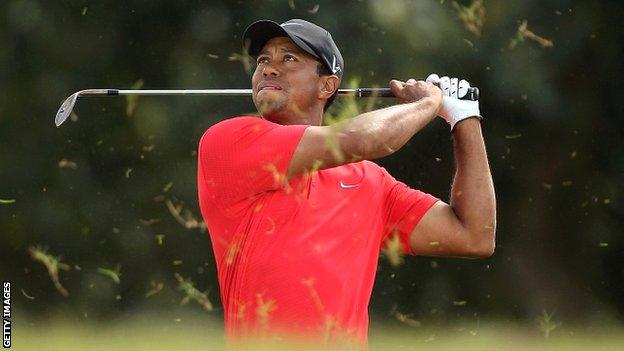 Former world number one Tiger Woods has insisted he will be fit to compete in the Masters, which starts on 5 April.

The 36-year-old pulled out of the final round of the WGC-Cadillac Championship on Sunday with the same Achilles injury that forced him to miss part of 2011.

But asked about the Masters at Augusta, where he has won four times, he said: "I'll be there. Don't worry about it.

"I took a few days off," Woods added. "I will start hitting balls on Friday. The stiffness is gone."

Woods has won 14 major titles but has been hampered by injury since capturing the last of them, the US Open, in 2008.

His left knee required surgery after he played through severe pain to win that tournament at Torrey Pines and he has had four operations on the joint including a reconstruction.

Woods damaged his knee and Achilles tendon while finishing fourth at last year's Masters, withdrew during the Players Championship with a recurrence of the injuries and missed the US Open and the Open.

He returned for the PGA Championship but missed the cut.

Woods last won a PGA Tour event in September 2009 but has shown signs of a return to form by winning the World Challenge event in December 2011 and carding a final round 62 to finish second to Rory McIlroy in the Honda Classic.

He is optimistic he can play in the Arnold Palmer Invitational at Bay Hill, Florida, in his final warm-up before the Masters at Augusta.