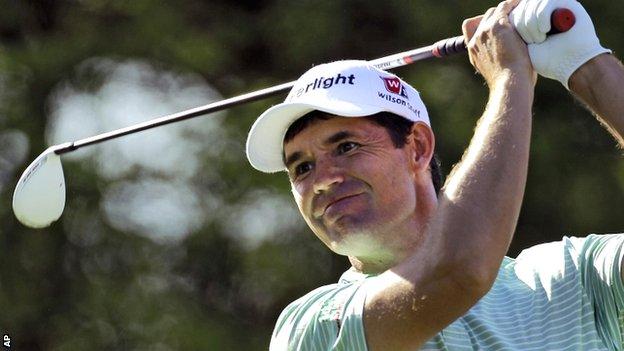 Irishman Padraig Harrington carded the lowest round of his career with a course-record 10-under-par 61 at the Transitions Championship in Florida.

He has since dropped to 90 in the world rankings and did not qualify for last week's World Golf Championship event.

Harrington raced to seven under after 12 holes and birdied the final three holes to secure a three-shot advantage.

He has not won a tournament since the 2010 Johor Open on the Asian Tour, had a hole-in-one in Wednesday's pro-am, and hit 14 greens in regulation during the first round.

The Dubliner was also in form on the putting surfaces, with 11 single-putts, including one from 75 feet to birdie the 17th.

Harrington's previous low round had been a 62, recorded on three separate occasions, most recently at the 2009 Portugal Masters.

The former course record at Copperhead had also been a 62, fired by Jeff Sluman in 2004 and matched by another former major champion, Mark Calcavecchia, in 2007.

Harrington admitted that thoughts of an unprecedented PGA Tour 59 had gone through his head at the par-five 11th.

"I had an eight-footer up the hill, as easy a putt as you could get, and I got over it and started thinking if I hole this I'm seven-under-par, seven holes to go," the former world number three said. "I just got totally out of where I should have been, hit a bad putt and missed.

He added: "I'm very comfortable where my game is at. I've made a lot of good improvements and I feel like things are ready to happen. Obviously today it showed the potential. Today is a peak.

"We will wait and see what happens over the next number of weeks. I'm trying to stay patient. I know my game is good. One of the hardest things is to wait with confidence."

Englishman Paul Casey and Greg Owen were joined on 70. Further back, Martin Laird hit a round of 73 to see the Scot finish the day on two-over.

Masters champion Charl Schwartzel faired much worse and finished a distant 15 strokes back from the lead.