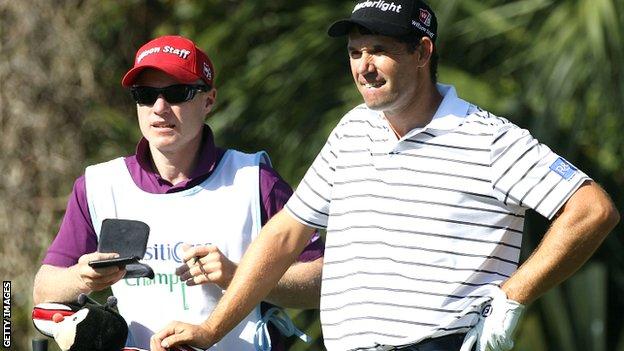 Padraig Harrington failed to match his first-day heroics as a 73 left him two shots off the lead at the halfway stage of Florida's Transitions Championship.

The 40-year-old fired a course record 61 on day one but had only one birdie in a two-over-par second round to fall into a share of second at eight under.

World number two Luke Donald birdied four out of five holes in a 68 and is in a group of five at seven under.

American Jason Dufner leads at 10 under after a second successive 66.

Harrington had been in excellent form with the putter in the first round, holing from 75 feet to birdie the 17th, but took 33 putts on day two, missing from inside 10 feet on four occasions.

"I didn't do too much damage today," Harrington said. "But the great thing is, having shot a good score yesterday, I felt that if I played the best golf on the weekend, I would be the winner.

Dufner, meanwhile, has yet to make a bogey in the first 36 holes at the Copperhead Course at Innisbrook as he seeks a first PGA Tour victory in his 159th event.

Donald began his second round from the 10th hole and, after playing his first nine in one over, his run of birdies began at the first.

Masters champion Charl Schwartzel failed to make the cut following another disappointing day, as he followed up his 76 with a 73.